Sean Joy, CEO of Southern Star Cruise and Buccaneer Pirate Cruise, had spent most of his career in middle market private equity. Prior to joining Chenmark, Sean worked on a small team focused on turning businesses around and selling them. His learnings during this chapter in his career set him up for success to be a small business operator himself.

“Before Chenmark, most of my career was spent in middle market private equity. It wasn’t our mandate to help businesses for the long run – we focused more on the short-term. We’d work to stabilize the business, develop and execute on a new strategic plan to drive EBITDA growth, then sell the business and hopefully recover our debt or better. It was a great learning experience for me because I got to work really closely with a wide array of businesses and worked to understand what went wrong, what can go wrong, and how CEOs and management teams turn businesses around.” 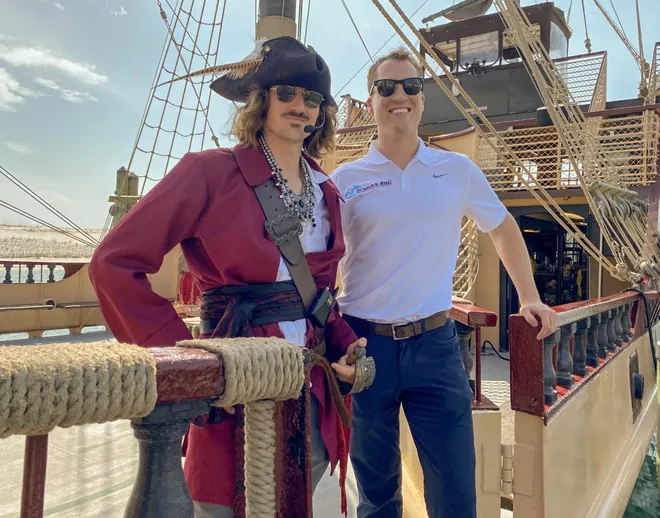 One day, while listening to an episode of Invest Like the Best podcast, Sean serendipitously learned about Chenmark. It was Sean’s first introduction to the world of search funds, permanent equity, and microcap holding companies and he was hooked. Sean had always been interested in small businesses and in operating a business himself. Chenmark immediately appealed to him.

“I first learned about the Chenmark model when I heard James and Trish Higgins speak on a podcast. I wasn’t looking for a new role at that time, but I was immediately excited about what they were doing. I liked their perspectives on taking a long term approach to building a compounding holding company. I liked that it wasn’t short term-oriented or focused on maximizing a P&L for a few years and then selling the business. In the private equity world, sometimes you’re just propping up a business for the sale process. That’s not as interesting or fulfilling to me as building something that’s going to be durable and continue thriving and employing people for a long period of time. I always enjoyed the operating side of business more than just pure finance, and Chenmark takes a more active role in the operations of a business. I really liked the Higginses’ perspective. I always wanted to run my own business at some point in my career, and Chenmark seemed like an awesome opportunity to do that in a relatively short amount of time.”

During his first six months as a GVP, Sean helped with new acquisitions and existing portfolio company operations. He then picked up and moved into a CFO role at Outerland, a landscaping company on Cape Cod. After about six months as a CFO, Sean moved again and became the CEO of the Southern Star Cruise and Buccaneer Pirate Cruise in Florida, two brands operating under one company, with hopefully more to follow. Sean would now be able to run his own small business, while still being supported by a close knit team.

“The primary thing that attracted me to Chenmark was that I would have the opportunity to run my own business sooner rather than later, and that was something I always wanted to do in the long run. At Chenmark it’s a much shorter path to CEO than any other paths I saw. I considered pursuing a self-funded search, but I prefer to be on a team. The beautiful thing about Chenmark is that there are so many resources and shared services across the portfolio companies that are available to me. I wouldn’t have access to resources like that if I was doing this on my own.”

Since joining Chenmark, and especially since becoming CEO, Sean has learned just how different this experience has been than anything he did prior to becoming a GVP.

“There are definitely a lot of differences between the middle market and small business. I think for me the biggest difference is freedom. In small business you have much more freedom to focus on what you think is important. There’s freedom to do what you want to do on a day-to-day basis and freedom to choose which longer term projects to take on. There are fewer meetings, less bureaucracy, less training, and overall just fewer taxes on your time. Most of the time I can work on what I want to work on and be more creative, which is a lot more fulfilling for me personally.”

Sean has led teams in the past, but this CEO role has been his greatest leadership responsibility to date.

“The other side of that freedom is that it’s a lot more responsibility. When you’re at a large organization, the buck doesn’t really stop with you. You might have a recommendation on a decision, but ultimately your boss or their boss is going to weigh in and it will be a group or your boss’s decision. When you’re at a small business, it’s ultimately your decision. It’s your responsibility to make sure the business performs well. On top of that, your employees’ livelihoods are dependent on you making good decisions, adapting to change, and leading the business through good and bad times.”

As all small business leaders know, the day-to-day operations aren’t always smooth sailing. Sean has found that navigating the freedom and responsibility of his role has been made easier by the network he has to lean on if things aren’t going as planned.

“Being a part of Chenmark’s portfolio means I have other CEOs to lean on who have most likely dealt with similar issues. Even if they haven’t, they’re a smart group of individuals who like to help each other solve problems. Among the network of CEOs, none of us give each other prescriptive advice. We serve as sounding boards for one another and offer possible solutions or ideas. The Chenmark network and support structure is invaluable.”