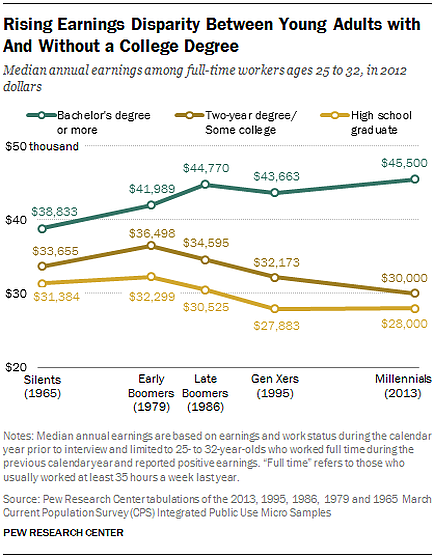 This week we were fortunate to attend a portion of the American Enterprise Institute’s World Forum. While its scholars publish prodigious volumes of thought provoking work on many different topics, at its core, AEI views itself as a champion of free enterprise and the American Dream, which decades of polling data suggest has four key components: freedom, economic opportunity, homeownership, and the ability to provide a better life for the next generation.

We believe strongly in these principles which is why we are troubled by recent surveys that indicate increasing portions of the population believe the American Dream is something they simply don’t have access to. A recent publication by AEI scholar Karlyn Bowman highlighted that, “forty-three percent of Americans told Gallup pollsters in 1998 that there was more opportunity for the average person to get ahead than there used to be. In 2013, 12 percent gave that response, while 58 percent said less and 28 percent said about the same (Gallup).” Additional polling data shows that, “in the 1986 Roper/Wall Street Journal survey, 32 percent said [the American Dream] was very much alive, 54 percent somewhat alive, and 11 percent not really alive. A March 2011 Pew Charitable Trusts poll showed that 17 percent thought it was very much alive, while a majority, 53 percent, believed the dream was somewhat alive and 27 percent not really alive.”

Domestic macro data provides a hint at the cause for the increase in pessimism. One can think about the health of the US economy as a function of four variables: productivity, GDP, employment, and income. From 1950-1980, these variables tracked each other tick for tick. Since then, and especially since 2000, GDP and productivity have continued their steady climb while employment and income have stagnated or even declined. Visually, the trend looks like this: Naturally, without tangible growth in employment and median income, it is difficult for a broad cross section of the population to feel like they are participating in an American Dream that promises the opportunity for progress. This is a long term problem for the country, and while some contend that the data argues for a political solution, we favor another path. As business owners, we believe that a healthy and robust economy for all will ultimately benefit our own individual interests. As such, we feel we have an obligation to promote the growth and development of all the members of our community, and we are actively seeking out ways to do just that.

One way corporate America can serve itself while helping promote the overall health of the economy is by taking an active role in the development of its own workforce. To that end, we were interested to read an article this week on the value of apprenticeships as an effective bridge between the classroom and the office. We have written previously about the existence of a skills gap in which the educational system is not equipping today’s college or high school graduates with the necessary skills to perform well in the job market. There are two factors at play here. First, the earnings potential of a high school graduate relative to someone with a college degree has plummeted in recent years: Second, even among college graduates, many believe they would have benefited from more work experience or job training while in school. In a recent PEW survey, “About half of all college graduates said getting more work experience while still in school would have put them in a better position to get the kind of job they wanted. Another three-in-ten said they should have started looking for a job sooner or picked a different major.”

On the other end of the spectrum, companies also feel their entry-level workers lack an ideal skill-set. “Per a McKinsey report, 45% of employers in the U.S. cite a lack of skills as a common reason for entry-level vacancies. In another survey, 93% of employers said they faced an overall skills gap and 15% attributed the problem to a lack of workers with educational backgrounds in science, technology, engineering, and mathematics.”

If both the suppliers and consumers of labor sense a problem, there is clearly opportunity for improvement. We believe that rather than relying on the educational system, companies should embrace the opportunity to build talent from the ground up. Internships or apprenticeships for current students or recent graduates could ease the transition from school to the workplace. Moreover, companies are likely to recoup the cost of such programs over the long term by employing a labor force with targeted high-level training. We will continue to monitor this trend and look to implement it ourselves where we are able.

On March 8th, the world celebrated International Women’s Day, which seeks to bring awareness to women’s economic, political and social achievements. Amidst the barrage of celebratory events, speeches, purple ribbons and Facebook posts, one article, buried in the depths of the Wall Street Journal opinion pages, stood out to us. In an article titled “For Gender Equality, You Can’t Beat Capitalism,” Antony Davies and James Harrigan reminded us how International Women’s Day originated in “American socialism and Eastern European communism”:

“The day was first declared by the American Socialist Party in 1909 and, in 1917, it set into motion a sequence of events that would become Russia’s February Revolution. Female workers went on strike that day to achieve ‘bread and peace’ in the face of World War I. Leon Trotsky later concluded that this event inaugurated the revolution. Socialist leaders used International Women’s Day ostensibly to highlight their commitment to gender equity.”

As investors and business owners, we are strong free-enterprise advocates, so the reminder that International Women’s Day has “socialist” roots caught our eye! However, despite its origins, Davies and Harrigan uncovered a compelling argument about the relationship between free enterprise and advancing women’s rights:

“Contrary to its socialist origins, more than 100 years of evidence since the first International Women’s Day suggests that free markets are the single best solution to inequity, gender or otherwise. On this the data are unmistakable….”

“What is the implication? As compared with men, women in economically freer countries hold more elected seats in government, have longer life expectancies, achieve higher education levels, and earn higher incomes than do women in less economically free countries. In short, in freer economies, women’s lives are longer, more prosperous and more self-directed.

This result might not come as a surprise. Rich countries tend to be more economically free, and people in rich countries tend to have more time and energy to be concerned with outcome equality. So perhaps gender equality isn’t a function of economic freedom so much as wealth.

Davies and Harrigan’s article reminded us that the moral argument underpinning free enterprise — that the capitalist system has brought billions of people out of poverty over the past century — does not only apply to the economically disadvantaged. Rather, free enterprise, in its purest form, is a compelling force that has the ability to empower all disenfranchised people, regardless of class, race, or gender.