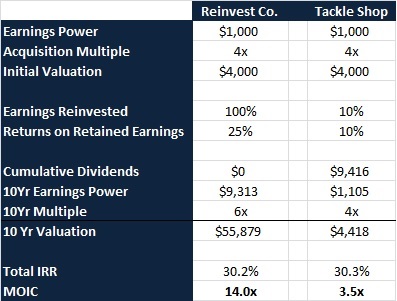 Here is a topic we have been thinking about this week:

When we first stumbled across the world of small business investing, we wrote about the return potential of a theoretical bait shop that occupied prime real estate next to a remote fishing spot. While it is a simple and somewhat boring business with limited pricing power and low barriers to entry, the thought was that such a shop could extract above average returns by virtue of its isolated geographic niche. The drawback was that there were limited opportunities for reinvestment (the fishing spot in our example likely didn’t need two tackle shops), but this seemed to be ok if, from a broader perspective, one could find other bait-shop-type investments that could be purchased with the excess free cash of the original. Our thinking was that, over time, a portfolio of bait shops would yield a significant, recurring source of cash flow backed by a diversity of geographic or industry niches.

Of course, reality is often more complicated than theory, and while the appeal of the bait shop portfolio remains, as business owners we now find ourselves spending considerable time evaluating reinvestment opportunities in the businesses we own rather than focusing exclusively on where the next bait shop might be. The fact is that our portfolio companies aren’t completely isolated, and their strong position in their local industry or geography can produce compelling opportunities to invest in future growth. Accordingly, we spent time this week thinking more deeply about capital allocation and its longer term implications.

As any finance student will tell you, the key to long-term compounding is the ability to invest free cash at consistently high rates of return. This is where a business with high return reinvestment opportunities can differentiate itself from the bait shop example. While the earnings power of the bait shop is unlikely to change, a company with a reinvestment runway can materially increase its earnings power over time. A recent post on the Base Hit Investing blog highlighted this difference by drawing a distinction between legacy and reinvestment moats:

“Businesses with a ‘Legacy Moat’ possess a solid competitive position that results in healthy profits and strong returns on invested capital…Think of a self-storage facility in a rural town with a high occupancy rate and little competition. This location may be generating $200,000 of annual free cash flow, a solid yield on the $1,000,000 of capital used to build the facility. As long as they run a tight operation, and a competing storage facility doesn’t open across the street, the owner can be reasonably assured that the earnings power will persist or modestly grow over time. But what does the owner do with the $200,000 that the operation generates each year?…wherever that capital goes, it likely won’t be at the same 20% return earned on the initial facility…

There is a second group of companies that have all the benefits of a Legacy Moat, but also have opportunities to deploy incremental capital at high rates because they have a ‘Reinvestment Moat’…instead of shipping the earnings back to the owner at the end of each year, the vast majority of the capital will be retained and deployed into opportunities that stand a high likelihood of producing high returns. Think of Wal-Mart in 1972. There were 51 locations open at the time and the overall business generated a 52% pre-tax return on net tangible assets. Clearly their early stores were working, they dominated small towns with a differentiated format and a fanatical devotion to low prices…the clear path was to reinvest the earnings right back into opening more Wal-Marts for as long as possible. Today there are over 11,000 Wal-Mart locations throughout the world and both sales and net income are up over 5,000x from 1972 levels.”

Of course, finding the next Wal-Mart is highly unlikely, and companies with indefinite reinvestment opportunities are exceedingly rare. However, lack of an indefinite runway doesn’t mean that a more modest pipeline of high return opportunities isn’t worth pursuing. In our landscaping operation, for instance, we have been able to complete small bolt-on acquisitions at multiples of cash flow that imply a better than 35% return on investment. More recently, we have begun a review of more efficient mower technology that, based on our analysis, has the potential to pay for itself in under two years implying a better than 50% ROI. The point is that reinvestment at high rates can have a profoundly positive impact on the long-term earnings potential of an enterprise. Consider the following analysis based on work from the Base Hit investing blog, which has been adjusted to reflect the realities of small business investing: In this scenario, the tackle shop company produces high returns on capital, reinvests modestly to ensure the legacy moat is protected, and distributes the remaining cash flow via dividends. The reinvest co., on the other hand, retains all its capital which it is able to deploy at yields consistent with that of the original asset base. Over time, these investments result in significant compounding of earnings, more than justifying an increased exit multiple. The result is that while the companies produce similar IRR’s (the extent to which this metric can be skewed by cash flow timing is a topic for another week), the reinvest co. returns materially more as a multiple of invested capital.

Importantly, this example deals with the single company case. From a portfolio perspective, the returns from a series of bait shop investments will begin to approximate that of the reinvest co. so long as the pipeline for future acquisitions remains strong and the cash drag associated with deal timing isn’t overly burdensome. The key point is that as investors, our job first and foremost is to identify companies with enduring competitive positions. We talk about this as passing the “will it be around in 10 years?” test. However, the next step is paying close attention to the reinvestment runway as we might be better served to invest in our own backyard rather than searching for the next bait shop.