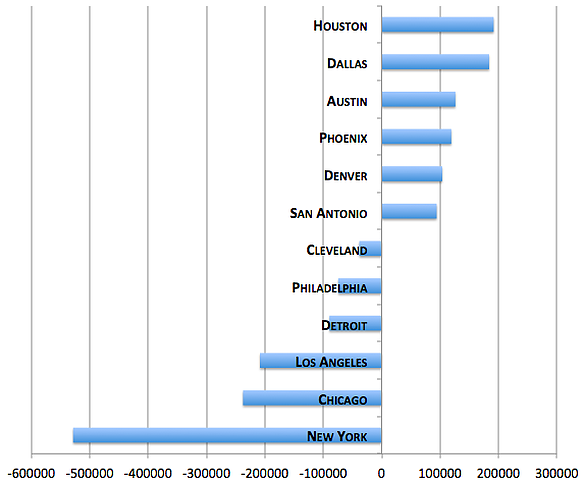 Weekly Thoughts: Competitiveness Project, Millennials, and Where to Live

We recently listened to a fascinating talk by Harvard Business School professor Jan Rivkin titled “An Economy Doing Half its Job: Findings from the HBS project on U.S. Competitiveness.” Rivkin is co-chair (along with Michael Porter) of HBS’s U.S. Competitiveness Project, a research-led effort to address concerns that the United States is facing long term structural challenges to competitiveness. Rivkin argues that true competitiveness is not simply an economy that produces jobs due to low wages and weak currency, but rather the “ability of firms operating in the U.S. to compete successfully in the global economy while supporting high and rising living standards for the average American.”

While Rivkin made a compelling argument that the U.S. is facing structural competitive challenges, we found the graph below most startling. For the first time since the 1970’s, net new business formation has turned negative, meaning that the American economy is actually dissolving more businesses than it creates.

Rivkin highlighted that as the American economy loses small businesses, the connection between business and the local community weakens. Large corporations, who have international consumers and employees, have less incentive to invest in local education, culture and infrastructure. This lack of investment perpetuates a cycle where the American middle class is not prepared to conduct the value-added work corporations desire.

While government could play a role in rectifying these concerning trends, an accompanying Competitiveness Project report highlighted three areas where thoughtful approaches from business leaders could help restore American competitiveness as well. These include engaging in supportive partnerships with the K–12 education system, working with local community groups to develop tangible workplace skills, and funding local transportation infrastructure projects. From the report:

“Cutting across these three areas, we see a need for business leaders to act—to move from an opportunistic patchwork of projects toward strategic, collaborative efforts that make the average American productive enough to command higher wages even in competitive global labor markets. Without such actions, the U.S. economy will continue to do only half its job, with many citizens struggling. And in the long run, American business will suffer from an inadequate workforce, a population of depleted consumers, and large blocs of anti-business voters. Businesses cannot thrive for long while their communities languish.”

As small business owners, we take our accompanying responsibility to create a long-term sustainable economy seriously. As we progress in our endeavors, we look forward to investigating ways to establish partnerships with local schools, colleges and governments in an effort to combat the trends described in Rivkin’s discussion.

Competitiveness Project, An Economy Doing Half its Job

Millennials – the generation born between 1980 and 2000 – are often labeled as high-maintenance, lazy and entitled by older generations. Regardless of the stereotype, there’s no denying that the behavioral habits of Millennials will have an increasingly significant impact on American business, government and culture. At 92 million people, the Millennial generation is larger than the Baby Boomers who only number 77 million.

Understanding shifting demographic landscapes – and the associated mega-trends – is important to investors of all types. As such, Goldman Sachs recently released a data set that looks at the characteristics of this emerging generation. The following is a summary of the data:

Due to lower employment levels and smaller incomes, Millennials have less money than previous generations. Mean income for 15-24 year olds as a percentage of the total population has dropped from 69% in 2000 to 64% in 2012. They also have more debt. The mean student loan balance for 25 year olds has increased from $10,649 in 2003 to $20,929 in 2013. Likely as a result of having lower income, Millennials have been reluctant to buy big ticket items such as cars and luxury goods. Instead, Millennials have gravitated towards a “sharing economy,” which means that certain technology enabled services – such as Uber, Rent the Runway and Airbnb – are able to provide access to products without the associated ownership costs.

With less to spend, Millennials are putting off traditional commitments such as marriage, children and home ownership. For example, in 1968, 56% of adults aged 18-31 were married and living in their own household. In 2012, that figure stood at 23%. Although a growing number of Millennials are choosing to live at home with their parents, 93% report that they would like to own a home sometime in the future, 70% say they’d eventually like to get married, and 74% would like to have children. This could mean that when Millennials eventually do settle down, household formation could increase significantly.

Interestingly, Millennials are also more dedicated to health and wellbeing than previous generations. As the below table shows, this generation believes that health is a more holistic pursuit than simply avoiding illness.

“What’s your definition of healthy?”:

Millennials have grown up in an “always-on digital world.” As a result, Millennials play, relax, review, buy and learn in drastically different ways than previous generations. For example, after searching online, 38% of Millennials communicate with others about a service, product or brand via social media, and 16% communicate via a blog. For baby boomers, these numbers are 11% and 2% respectively. The ease with which Millenials leverage technology can significantly erode traditional brand power or could promote the development of entirely new industries. Businesses that fail to adapt will be left behind.

As Wayne Gretzky famously said, you have to “skate to where the puck is going to be, not where it has been.” As Millennials move into their prime employment and consumption years, we expect many of these behavioral preferences to have significant implications for the economy, and we look forward to anticipating where the “puck is going” as a result of these trends.

This week we read an interesting article in The Atlantic that focused on domestic migration since the great recession. As life-long residents of the Northeast, it often seems like New York and Boston exert a magnetic pull that would naturally increase population over time. However, the data tell a different story. From the article:

“If you pretend that the United States is populated exclusively by twentysomething graduates of national research universities, you’ll develop the sense that everybody is moving to the city centers of New York, Chicago, San Jose, and Boston. In fact, three of those metro areas have seen more Americans leaving than coming in the last five years. The cities with the highest levels of net domestic migration since 2010 are Houston, Dallas, Austin, Phoenix, Denver, and San Antonio….More broadly, we’re talking about sprawly metros with fast-growing suburbs in the Sun Belt.” These findings intrigued us, so we decided to dig a little deeper. Given the choice, where would we live? And what inputs would we use to make a decision? Pulling data on cost of living, income taxes, quality of life, business environment and a few other metrics, we compiled an “Optimal Living Index” (OLI) for each state. Our analysis is by no means exhaustive and depends heavily on the weightings of the various inputs, but initially the top five are: Wyoming, South Dakota, North Dakota, Washington, and Utah. If you are curious, New York, New Jersey and Connecticut all fall in the bottom 5, as each suffers from the effect of high personal and corporate taxes. Let us know if you are interested in the complete index!