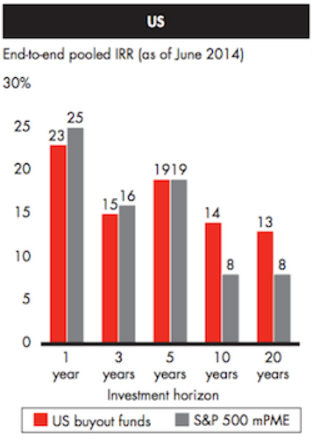 While our investment focus is very niche and in some ways incongruous with traditional private equity firms, we are always keen to follow news about trends in the broader M&A market. As such, we were interested to read a recent Preqin study that outlined how, despite returning a record of $443 billion to investors in 2015, unused capital (so-called “dry powder”) in the industry recently hit a new high of $839 billion (up from $757 billion at the end of last year). One consequence of these high levels of available capital is that valuations have reached record highs with average LBO’s in the United States seeing EBITDA multiples of over 10 times. Bain provided some commentary on the environment in their 2016 Global Private Equity Report, noting “so relentless has the steady climb of multiples become that PE industry insiders have come to refer to today’s multiple of 10 as ‘the new 7’—the cost of doing deals in a high-priced environment.”

Although common sense would suggest that higher valuations lead to lower returns, enthusiasm for the space remains high as there are currently more than 1,800 funds seeking to raise external capital (another record) and 56% of institutional investors polled by AI-CIO intend to increase their private equity allocation in the coming year. That said, there are concerns about the trajectory of the industry. For instance, at a recent industry conference, Joe Baratta, Blackstone’s top private equity dealmaker, noted: “For any professional investor, this is the most difficult period we’ve ever experienced. You have historically high multiples of cash flows, low yields. I’ve never seen it in my career. It’s the most treacherous moment.”

The real conundrum for private equity managers — and investors — is that the current environment is ideal for exiting existing positions at high valuations, thereby enabling funds to generate attractive returns on investments made years ago. On the flipside, the environment also makes it increasingly difficult to find attractive opportunities to redeploy capital. Christopher Elvin, Preqin’s head of private equity products, provides more insight:

“This level of fundraising has contributed to a massive build-up of capital waiting to be deployed by fund managers, and the total dry powder available to the industry climbs ever higher. The consequences of this ‘wall of capital,’ coupled with high asset pricing, are being seen in the difficulty many managers are reporting in finding attractive investment opportunities.”

Given this backdrop, it seems likely that aggregate private equity returns will decline over the coming years — particularly when interest rates rise. While Chenmark does not even register on the traditional private equity landscape, we believe that, regardless of deal size, a strict discipline around valuation is essential to ensuring attractive, long-term returns for investors and plan to stay committed to that strategy above all else.

With yields low and a growing cash pile waiting to be deployed at PE funds, we were not surprised to read that some managers are launching longer-term funds as a way of opening up a universe of deals that were previously uninvestible under the traditional PE horizon of three to ten years (depending on who you ask). Companies pursuing this strategy are pitching investors on lower, less volatile returns without the requirement to reinvest distributed capital as frequently.

The logic of that strategy is not new to Chenmark—we believe these characteristics hold true in the small business realm as well—but we were interested to see this chart from a Business Insider article highlighting that, even under the traditional, shorter term strategy, buyout funds do better when compared to the public markets over longer periods of time: As The Economist points out, this space is still very niche—an estimated 5% of funds set up in 2016 have an intended lifespan longer than 12 years—but some of the biggest names in the industry are leading the charge with some pretty substantial raises. Per a PitchBook bulletin from last week:

“Blackstone is in the process of raising $5 billion for a fund that could have a horizon of up to 20 years….Altas Partners closed a $1 billion fund in May that can maintain investments for up to 17 years, and CVC Capital Partners closed a $4.4 billion strategic opportunities fund earlier this year that will reportedly have a 15-year lifespan.”

We are excited to see both investors and dealmakers realize the opportunity available in longer term investments as it further validates our own thesis. Of course, we focus on a scale of company orders of magnitude smaller than these funds, but the fundamental thinking remains the same. As Joe Baratta, head of private equity at Blackstone Group said, “I don’t know why Warren Buffett should be the only person who can have a 15-year, 14% sort of return horizon.” Neither does Chenmark.