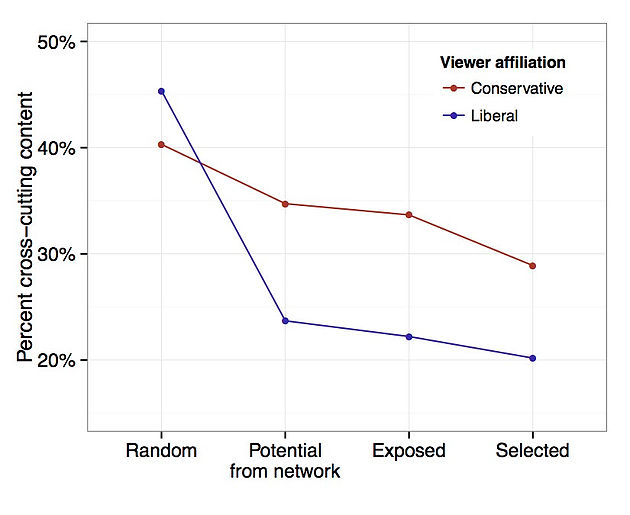 Facebook’s co-sponsor role in last night’s GOP debate highlights the fact that the social media network will serve as a crucial information hub as the election process plays out. In fact, Facebook’s prominence demonstrates social media’s increasingly strong position as a primary source for news of all types. For the most part, this is a good thing. Algorithms from Google, Facebook, et al. do a good job of connecting individuals with content that matters to them and can profoundly enrich their lives. However, what gets lost in this narrative is the fact that these platforms are also curating such content in a unique way. From a Ted Talk by Eli Pariser, author of a book on this topic titled The Filter Bubble:

“If I search for something, and you search for something, even right now at the very same time, we may get very different search results. Even if you’re logged out, one engineer told me, there are 57 signals that Google looks at — everything from what kind of computer you’re on to what kind of browser you’re using to where you’re located — that it uses to personally tailor your query results. Think about it for a second: there is no standard Google anymore. And you know, the funny thing about this is that it’s hard to see. You can’t see how different your search results are from anyone else’s…..

So it’s not just Google and Facebook either. This is something that’s sweeping the Web. There are a whole host of companies that are doing this kind of personalization…. And this moves us very quickly toward a world in which the Internet is showing us what it thinks we want to see, but not necessarily what we need to see. As Eric Schmidt said, ‘It will be very hard for people to watch or consume something that has not in some sense been tailored for them.‘”

This concept is important for two reasons. The first, perhaps obviously, has to do with content diversity. By basing a search or news feed algorithm on the percieved “likability” of content, we risk only being exposed to information with which we generally agree. Facebook, to its credit, recently published in-depth research into this phenomenon using political affiliation as an example. Researchers at the company studied the networks of its users and found social network composition (potential from network), news feed results (exposed), and individual choice (selected) all reduce the content a user is likely to consume from an opposing viewpoint. Visually, the data looks like this: The second problem associated with filter bubbles has to do with content quality and the struggle between our future aspirational selves and our present impulsive selves. We’d all like to be the type of people who favor erudite articles that challenge our thought process, expand our world view, and improve our capabilities. However, the popularity of TMZ and Page Six indicate actual consumption patterns don’t always follow this idealized desire. Your author, for example, has had a half finished biography of John Rockefeller sitting beside his bed for months, but has had time this week to read about Tom Brady’s pool cover preferences. As Eli Pariser noted:

To us, this a crucially important issue not because it indicates Facebook and Google and others are acting inappropriately. To the contrary, these services provide access to new information that has changed the world for the better. However, as consumers, it is incumbent upon us to understand how this information will be delivered and the limits that such curation can impose. More importantly, the potential for filter bubbles means that we’ll have to work even harder to ensure we expose ourselves to quality, diverse content that can help us become more effective investors, and ideally, more interesting and well informed people.

We recently read Built to Last: Successful Habits of Visionary Companies, a business book written by Jim Collins and Jerry Porras in 1994. Despite the plethora of business books on the market, Built to Last hit a chord with its audience, lasting on the BusinessWeek best-seller list for more than six years. Built to Last is also notable because it sparked Jim Collins’ management guru reputation, enabling him to start his own Boulder, Colorado business research center, which ultimately produced the data behind his highly popular sequels Good to Great and Great by Choice.

In Built to Last, Collins and Porras summarize results from their six-year research investigation into the underlying traits and characteristics of enduring, visionary companies. To focus their work, they defined a visionary company as one that was founded before 1950, has had multiple product/service life-cycles and multiple generations of CEOs, is a premier institution in its industry, is widely admired by knowledgeable businesspeople, and has made an imprint on the world. Using this criteria, Collins and Porras identified 18 visionary companies which were compared to a control set of rivals. Both lists include familiar names, but it is the visionary set, including 3M (vs. Norton), Boeing (vs. Douglas Aircraft), Marriott (vs. Howard Johnsons), Merck (vs. Pfizer), Motorola (vs. Zenith), and Procter & Gamble (vs. Colgate-Palmolive), that remain iconic brands to this day.

While Built to Last has numerous insights into characteristics of enduring companies, we found one insight particularly relevant to our current endeavors: the tendency of visionary companies to focus on building clocks, rather than on telling time. Collins explains:

“Imagine that you met a remarkable person who could look at the sun or the stars and, amazingly, state the exact time and date. Wouldn’t it be even more amazing still if, instead of telling the time, that person built a clock that could tell the time forever, even after he or she were dead and gone?

Having a great idea or being a charismatic visionary leader is ‘time telling;’ building a company that can prosper far beyond the tenure of any single leader and through multiple product life cycles is ‘clock building.’ Those who build visionary companies tend to be clock builders. Their primary accomplishment is not the implementation of a great idea, the expression of a charismatic personality, or the accumulation of wealth. It is the company itself and what it stands for.“

We have no misconceptions about the difficulty associated with building a company that can endure management transitions, economic recessions, and shifting consumer preferences. As Built to Last outlines, a truly visionary company requires a patient, diligent devotion to a long-term mindset, combined with a healthy dose of luck. That said, as we begin to take ownership of small businesses, we strive to build a portfolio of clocks, rather than a network of time-tellers.

Last week, popular spin-studio SoulCycle filed for IPO, causing us to investigate the business behind the growing boutique fitness class industry. While we knew SoulCycle was popular, we were surprised by its scale. In 2014, the company earned $25 million on revenues of $112 million across a network of 38 studios in seven cities. The company, which started in 2006 with a 31-bike studio on Manhattan’s Upper West Side, has plans to add up to 250 locations in the coming years.

We were also intrigued by the contrast between SoulCycle’s business model and that of Planet Fitness, a traditional globo-gym that is simultaneously pursuing an IPO. SoulCycle typically charges $30/class, while Planet Fitness charges members a base rate of $10 per month. While some may dismiss SoulCycle as an overpriced service for one-percenters, the company’s widespread success — like many other boutique fitness programs — can be credited to a powerful brand-associated lifestyle that espouses fitness, fun, and spirituality. As explained by the New York Times:

“Its roots extend back a decade, when the chain’s founders, Elizabeth Cutler and Julie Rice, sought to create a new kind of cycling boutique. Unlike traditional workout classes, their company would feature — as described in Thursday’s prospectus — ‘cardio parties’ built around the personality of its instructors, blending high-octane workouts with more meditative elements in a candlelit studio. ‘SoulCycle instructors guide riders through an inspirational, meditative fitness experience designed to benefit the body, mind and soul,’ the company wrote in its prospectus, in a section entitled ‘Our Soul.’ ‘The experience is tribal. It is primal. And it is fun.'”

SoulCycle has built an incredibly strong base of “Soul Evangelists,” who espouse its benefits, proudly wear branded workout gear, and fully book classes within minutes of their opening online. These people also act as grass-roots marketers, enabling SoulCycle to keep a relatively small marketing budget.

“As exercise routines serve more roles in people’s lives—stress relief, psychotherapy, social outlet, even personal identity—the expense of boutiques becomes easier to justify, their devotees say. Boutique-fitness fans also say they like the fact that most workouts are led by instructors or coaches. Some say they feel a sense of belonging that overrides the fact that they’re spending more for fewer disciplines than what’s available at a health club.”

At first glance, it’s easy to dismiss these fitness programs as serious business. However, the dynamics underlying these business models are powerful, and their value proposition is clearly hitting a chord in today’s market. As a result, these programs are experiencing impressive growth, high customer retention rates, and strong margins. To us, it is a great reminder that there’s always room for business success for those who can address a need and add value to their customer base.