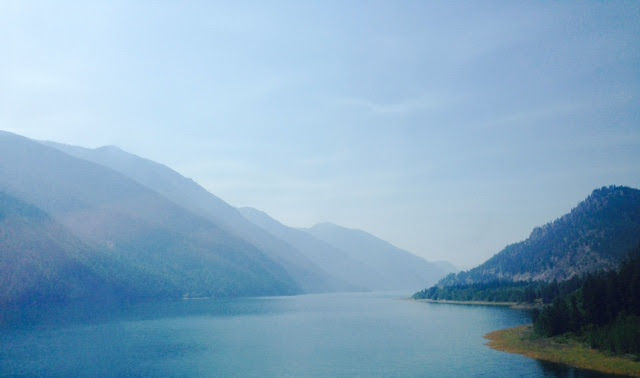 An Olympics related repost from 2016

For us, the stories behind these rankings are not just a reflection of national athletic prowess, but rather an interesting insight into how asset allocation plays a role in the realm of Olympic achievement.  Similar to those in charge of making decisions for an investment portfolio, each country has a governing body responsible for allocating funds amongst various national sports programs with the objective of maximizing returns (medals).  As it turns out, these organizations use similar tactics to those employed by corporate America, namely that winners get more funding while losers get less.

U.K. Sport, the body in charge of allocating public funds to elite-level sports in Great Britain, determines how funds are to be split between different programs by utilizing an approach that Dr. Borja Garcia, senior lecturer in sports management and policy at Loughborough University, describes as a “brutal regime, but it’s as crude as it is effective.”

In this program, each sport is given a target medal count.  If the target is achieved or exceeded, the sport receives more resources.  If the program does not hit its target, funding is cut.  Sports that have accounted for Britain’s resurgent medal success – gymnastics, boxing, and cycling – have seen increased investment.  After beating its target of 6-10 medals in the 2012 Olympics, for example, the cycling team saw its funding increase from £26 million to £30 million.  On the flip side, sports such as wrestling, table tennis, and volleyball, which all failed to achieve their 2012 medal targets, had funding reduced or cut altogether.  Objectively, the program works, and Great Britain’s results in Rio were exceptional.  The Guardian expands further:

“Most experts agree that UK Sports ‘no compromise’ funding approach has underpinned Great Britain’s rise from 36th in the medal table in Atlanta in 1996 to third at London 2012.  ‘It’s a very rational, cold approach.  Medals have gone up.  British elite sport is certainly booming.  The returns of medals per pound is there,’ said Garcia.”

“Every year, the United States Olympic Committee gives out about $50 million to more than 40 national sport federations to help athletes in their medal quests.  The distribution has become highly tactical: Under a pay-for-performance model championed by new Chief Executive Officer Scott Blackmun, the national sport-governing bodies have to make their case for funding based on how the money will turn medal hopefuls into medalists.”

For sports with a proven ability to win (gymnastics, shooting, bobsled), the USOC will increase funding.  For sports that have not won a medal in the last two Olympic cycles (synchronized swimming, weightlifting, canoe/kayak) funding decreases commensurately.   Furthermore, sports with basically no chance of winning a medal (handball) receive no funding.  As shown in the chart below, the strategy seems to be working, as there is a strong relationship between sports that have won the most medals and those that have received the most money. 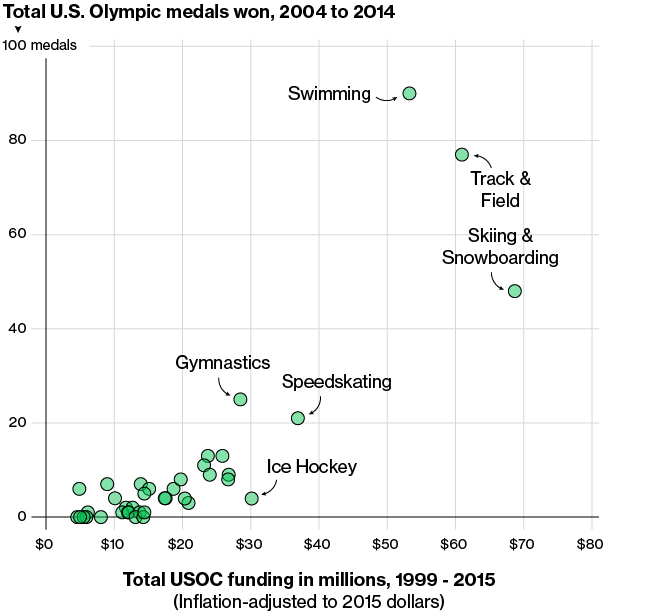 However, it’s important to understand that this approach is not simply about absolute medal count, but rather about funding low cost-per-medal sports (which we like to think of as a Sharpe Ratio for athletic funding).  Certain sports, for example, have so many opportunities to medal that they are a relatively cost-effective investment: The USOC provided almost $12 million over the last four years to track & field for 133 possible medals, making it one of the cheapest investments on a cost per potential medal basis ($89k).  On the flipside, more expensive sports – despite having podium potential – have seen cuts.  Despite long histories of success, for instance, American sailing and equestrianism have seen decreased allocations.  As Bloomberg puts it, “both sports are expensive to sponsor – boats and horses cost a lot more than skis and table tennis paddles.”

The key point is that for the most competitive Olympic programs the marginal budget dollar tends to go where the probability of success and the cost of that success can be optimized.  While we acknowledge that counter cyclical or mean reversion strategies for asset allocation have merit in some cases, paying for performance and capital efficiency are concepts that Chenmark believes in strongly.  We are pleased to see that the approach can be as effective on the medal stand as it is in the boardroom.