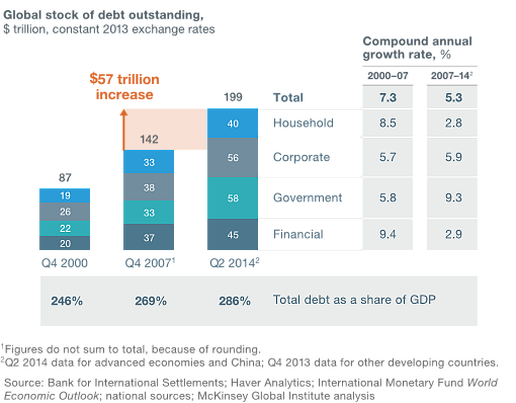 While we spend considerable time focusing on the specifics of individual companies, we also believe that it’s important to maintain a sense of the bigger picture. Accordingly, this week we spent some time reviewing the growing chorus of economists and policy makers who are voicing concerns about the aggregate level of global debt.

The popular narrative is that the period since the Great Recession has been marked by broad deleveraging. However, while developed market household debt has come down, particularly in the US and UK, this trend has been dwarfed by a rise in corporate and government debt. Moreover, in emerging economies, particularly China, debt of all types has simply exploded. A recent report from McKinsey noted that global debt outstanding increased from $142 trillion in 2000 to $199 trillion in Q2 2014. At the same time, debt as a share of GDP has also increased. In 2007, global debt outstanding accounted for 246% of global GDP. At the end of Q2 2014, it accounted for 286%. From the article: As any small business owner no doubt understands, high and rising debt levels, particularly in the absence of correspondingly high growth, can be suffocating, and can take years to reduce. The concept also applies to global debt, and in its report, Mckinsey highlighted three key areas of particular concern. First, government debt is so unsustainably high in some countries that the traditional methods of deleveraging (growth and austerity) are unlikely to work. Second, outside of the US and UK, many advanced economies in Northern Europe and Asia have continued to see rising household debt to income ratios, which exposes these nations to potential property related crises in the future. Finally, China deserves special attention as its debt has grown four fold since 2007 and the country now boasts a debt-to-GDP ratio larger than that of the US or Germany.

While there is no crisis currently unfolding, this issue will be important to monitor in the months and years to come for two key reasons. First, the fact that the global economy requires ever-increasing amounts of debt to grow is simply a reality that policy makers will need to find a way to manage. The decisions they make from a fiscal, monetary, and macro-prudential policy perspective can have a significant impact even on the smallest actors in the economy. Second, as students of history, we understand that many great fortunes have been made by those who are able to successfully navigate economic downturns. Should a crisis develop, we want to make sure we educate and prepare ourselves before those events occur, so that we understand where the best opportunities may lie.

Internally, we talk constantly about how to work best as a team. To inform that discussion, we try to take inspiration from many different fields, and this week we came across an article on the 99U blog about the collaborative efforts of string quartets. Large symphony orchestras and choirs are led by a conductor in much the same way as a CEO leads a company. Smaller musical groups, like string quartets, tend to avoid the central leadership figure and instead learn to create a cohesive unit where each member contributes toward a collective vision of how to perform. From the article:

“Juxtapose a conductor-less group like a string quartet with a symphony orchestra. In a symphony orchestra, a conductor guides the ensemble and determines its overall artistic mission. The string quartet, on the other hand, is a musical metaphor for conversation; each group has its own rhythm, style, and way of coming together as a whole. And they develop specific patterns of interaction that directly influence the quality of the music.”

Using conductor-less musical groups as a model, the article goes on to describe how various elements of rehearsal organization, performance communication, and conflict resolution among others can be applied just as equally to the office suite or the stage. While there are many interesting observations, and we encourage reading the article in its entirety, we were particularly drawn to the emphasis placed on each member embracing the value of his or her contribution. Sarah Darling, a founding member of A Far Cry, a Grammy-nominated chamber orchestra, noted that, “In music, it’s impossible to remove the fact that everyone has a very specific role to play. Playing your role beautifully and with absolute conviction is one way to help the group as a whole.” The article continues:

“The reason why professional ensembles like A Far Cry are so accomplished is that they spend countless hours scrutinizing their individual parts: how should I play this note? Why did the composer mark this passage as piano (soft) and not forte (loud)? Should I let another instrument take the lead here or should I shine through? What is the intended musical ‘gesture’ at this particular moment? In other words, what are these 3 or 4 or 20 notes trying to say? Without interpretation, music isn’t nearly as convincing…”

Similarly, in a work environment each member of a team will have a role to play, and different people may perceive a particular role differently. The best functioning teams are those that can empower their individual members to perform with confidence, as this will allow for the most comprehensive and dynamic final product. The article summed up the main point best:

“An oft-cited concern in the workplace is that people feel they’re not sharing their opinions frequently enough—or worse, that their opinions don’t mean anything. But worrying about the legitimacy of one’s contributions leads to a lot of unnecessary anxiety. Instead, understand that interpretation is embedded in the nature of the job itself. A robot isn’t doing your job—you are. Every aspect of the work requires your human intellect and emotional sagacity to seamlessly integrate your company’s moving parts. Without it, you’re not making music.”

By the time you read this, the long anticipated first round of the NFL draft will be over. Top quarterbacks Jameis Winston and Marcus Mariota will have been selected along with several other highly touted prospects expected to bring instant success to their new franchises. While many story lines will continue throughout the weekend, we are pretty confident you won’t hear much about Tyler Varga or Gordon Hill, two middling prospects just hoping to be drafted.

We discovered them thanks to an MMQB article highlighting their agent, Joe Linta, a virtual unknown by the public, but considered one of the best talent spotters by scouts and GMs across the league. What makes Linta unique, and our reason for highlighting him here, is his unorthodox approach to sourcing talent. While the majority of the talent evaluation process is driven by two major scouting services doing “initial grades” on prospects, Linta loves finding players who have fallen through the cracks. From the article:

“Linta actively seeks out players snubbed by NFL scouting services who sometimes don’t make it through training camp. Of Linta’s current crop of 16 prospects, most are projected to be taken in the fourth round or lower and about half won’t be drafted. ‘For me,’ Linta says, ‘it’s like finding buried treasure.'”

It’s one thing to focus on under-represented or fringe prospects—indeed, it’s where many new agents must start out—but what separates Linta is his track record. He has represented over 100 players in his career as an agent and currently boasts three starting quarterbacks as clients (Flacco, Mettenberger, and Hoyer). What distinguishes him the most, however, is that “over the past few years, about half of Linta’s clients who weren’t invited to the combine have ended up on NFL rosters.”

To put that stat in context, only 24 players who were not invited to the NFL combine are drafted per year. On top of that, after taking into account established veterans and high draft picks, each team brings in 45 players to compete for roughly eight available roster spots. Put simply, Linta’s 50% hit rate is orders of magnitude better than the odds, and his sustained out-performance has earned him blind faith among NFL executives. “’If you get a guy Joe vouches for, you know he’s legitimate,’ says Vikings general manager Rick Spielman. ‘Every year, Joe gives us his list of guys. We make sure we check all of them out.'”

From both an investing and football perspective, we admire what Linta has done over his career. It is one thing to identify top tier talent that demands top tier pay, but it’s not lost on us that enduring success in the NFL depends significantly on the quality of the entire 53 man roster. You won’t see Linta’s guys on Fantasy Football rosters or going to many Pro-Bowls, but every year Linta gives teams quality contributors for a league minimum salary. This is not so different from investing where frequently the best returns come not from paying an inflated price for an undeniably high quality asset, but instead from looking at those opportunities that have fallen through the cracks and present compelling value. We look forward to seeing Varga and Hill in NFL jerseys come Saturday, and hope that we can find some buried treasure of our own in the small business space.