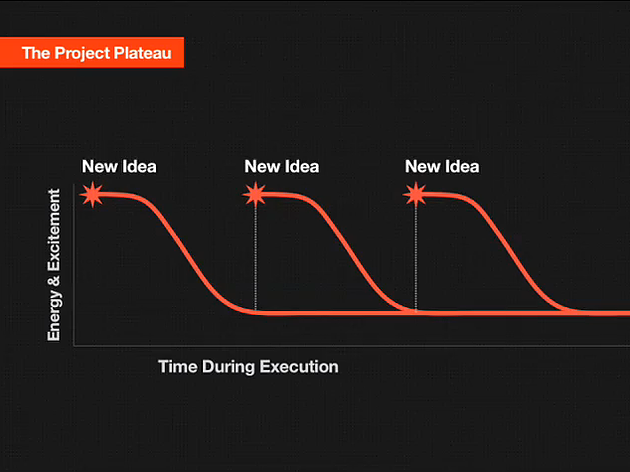 Weekly Thoughts: The Project Plateau, The Shake Shack Economy and Seeing vs. Observing

This week we attended a lecture by Scott Belsky, the founder of Behance, a social networking platform for professionals in creative industries. Mr. Belsky has published a book, “Making Ideas Happen,” for which he spent significant time researching how successful entrepreneurs execute on good ideas. The problem, as Belsky sees it, is that the excitement associated with new ideas has a rather extreme decay curve as the newness of the idea wears off and the more mundane process of bringing the idea to market becomes more important. To compensate, creative types are prone to simply engineer another new idea with its own initial excitement and eventual decay curve. This process traps budding entrepreneurs in a project plateau with a lifecycle that looks like this: As Belsky noted, “The project plateau is littered with the carcases of dead ideas that have never happened. What do we do? We just generate a new idea. We do it again and again and again. What we continue to do is we escape this project plateau with a new idea, and instantaneously we return to this high of excitement, this willingness to execute. And this is why there are more half-written novels in the world than there are novels.”

Belsky suggested a number of ways to break this chain including self imposed restraints, action plans oriented toward incremental progress and choosing execution-oriented partners. For us, the right solution to break the project plateau will likely be a combination of several factors. Most important however, is the simple recognition that the project plateau exists and big ideas can only have impact if they are actually executed effectively.

Its hard to ignore the convenient juxtaposition between Shake Shack and McDonalds in the recent news cycle. Just as Danny Meyer’s burger joint concept IPO’d with tremendous fan fare and a sky-high multiple, McDonald’s was parting ways with its CEO, Don Thompson, after five consecutive quarters of disappointing sales.

The differing trajectory of the two companies is the latest example of the triumph of “fast casual” dining at the expense of fast food, a trend which itself has mirrored changes in the income distribution and consumption habits of urban professionals, according to James Suroweicki of the New Yorker. Suroweicki points out that since the nineteen nineties, affluent consumers have developed a serious interest in the food they consumed. Moreover, since most of the economic gains of the last several decades accrued to this cohort, they were in a position to speak with their wallet. From the New Yorker:

“Traditional fast-food chains pretty much ignored these changes. They were still doing great business, and their industrial model made it hard to appeal to anyone who was concerned about natural ingredients and freshness. That created an opening for fast-casual restaurants. You had tens of millions of affluent consumers. They ate out a lot. They were comfortable with fast food, having grown up during its heyday, but they wanted something other than the typical factory-made burger. So, even as the fast-food giants focussed on keeping prices down, places like Panera and Chipotle began charging higher prices. Their customers never flinched.

It might seem that the success of fast-casual was simply a matter of producing the right product at the right time. But restaurants like Chipotle and Five Guys didn’t just respond to customer demand; they also shaped it. As Darren Tristano, an analyst at Technomic, put it, ‘Consumers didn’t really know what they wanted until they could get it.‘”

After a stunning first day of trading, Shake Shack now commands a valuation of over $1.5 billion as investors price in expectations of Chipotle-like performance. As consumers, we will continue to enjoy their burgers when we happen to find ourselves in New York City. As business analysts, we are keen to follow the company’s development as it navigates evolving consumer tastes and executes on the prodigious growth the stock price implies. As investors however, a company trading at 100 times EBITDA gives us pause. We may buy burgers in threes, but we prefer our multiples in single digits.

Shane Parrish, author of the Farnam Street Blog, published an interesting post recently about the difference between seeing and observing. To illustrate his point he referenced Sherlock Holmes. From the blog post:

“In ‘A Scandal in Bohemia,’ Sherlock Holmes teaches Watson the difference between seeing and observing:

‘When I hear you give your reasons,’ I remarked, ‘the thing always appears to me to be so ridiculously simple that I could easily do it myself, though at each successive instance of your reasoning, I am baffled until you explain your process. And yet I believe that my eyes are as good as yours.’

‘Quite so,’ he answered, lighting a cigarette, and throwing himself down into an armchair. ‘You see, but you do not observe. The distinction is clear. For example, you have frequently seen the steps which lead up from the hall to this room.’

‘Well, some hundreds of times.’

‘Then how many are there?’

‘Quite so! You have not observed. And yet you have seen. That is just my point. Now, I know that there are seventeen steps, because I have both seen and observed.'”

We believe careful observation is essential not only for cracking cases on Baker Street, but also for running any business. Harvard Business School Professor Max Bazerman shares this view and notes that while many CEOs are renowned for their ability to focus, its their ability to notice effectively that can play a significant role in their success. In fact, Bazerman provides the exact blueprint we intend to follow:

“I think a lot of our failure to notice happens when we’re busy. It happens when we don’t know exactly what’s happening. But I think it’s our job as executives, as leaders, as professionals to act when we’re pretty sure that there’s something wrong. It’s our job to notice and to not simply be passive when we can’t quite figure out the evidence. It’s our job to take steps to figure out what’s going on and to act on critical information.”