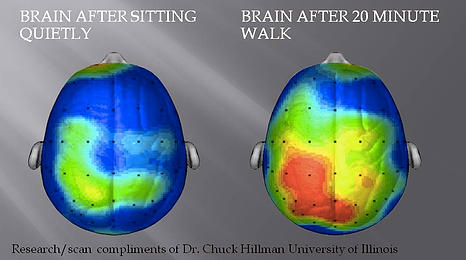 Weekly Thoughts: Resilience and Tolerable Failure, How to Manage and Exercise and Brain Activity

In late December Bret Stephens published a terrific op-ed in the Wall Street Journal which highlighted America’s impressive innovation track record. Stephens notes that from social media to cancer immunotherapy, a significant portion of 21st century innovations have “‘Made in USA’ stamped all over [them].” Interestingly, the cause of this phenomenon from Stephens’ perspective is not the outlier ability or outsized wealth of American citizens, nor is it the result of scientific or bureaucratic clairvoyance. Instead, the article points to the fundamental nature of the American economic system as the driver of innovative advances. From the op-ed:

“Innovation depends less on developing specific ideas than it does on creating broad spaces. Autocracies can always cultivate their chess champions, piano prodigies and nuclear engineers; they can always mobilize their top 1% to accomplish some task. The autocrats’ quandary is what to do with the remaining 99%. They have no real answer, other than to administer, dictate and repress.

A free society that is willing to place millions of small bets on persons unknown and things unseen doesn’t have this problem. Flexibility, not hardness, is its true test of strength. Success is a result of experiment not design. Failure is tolerable to the extent that adaptation is possible. This is the American secret, which we often forget because we can’t imagine it any other way.”

Stephens’ sentiment reminded us a great deal of the concept of anti-fragility popularized by Nassim Tableb in his most recent book. He outlined some of his view in a recent interview with the Singapore Business Times. From the interview:

“To encourage ‘swashbucklers’ and entrepreneurs, people have to be taught to take intelligent risks – something that universities don’t teach. Universities teach you not to take risks. Because if you make mistakes, you flunk the exam. But in life there is no such thing as a track record of exams. You start from zero. So you have to teach people to fail and take risks.

You absolutely need failure for a system to work. The healthiest economy in producing new businesses is the US. We have the highest failure rate. The failure rate is the most predictive metric for economic health.“

We very much agree with these sentiments on a macro level, but we think they apply in the micro case as well. At any company we own, we intend to create our own “broad spaces” with the hope that flexibility, adaptation and intelligent risk taking will foster an environment for significant growth.

In November, Ben Horowitz gave a lecture titled “How to Manage” at Stanford’s “How to Start a Start-up” class. Horowitz’s main piece of advice is that “when making a critical decision, you must understand how it will be interpreted from each person’s point of view and its impact on the union of the individual views.” Horowitz elaborates:

“You have to add up every employee’s view and then incorporate that into your own view. Otherwise your management decisions are going to have weird side effects and potentially dangerous consequences. It’s a hard thing to do because at the point when you are making a decision, you’re often under a great deal of pressure. With all these things, it’s critical to think it through from everybody’s prospective because when push comes to shove, that’s going to matter. That’s going to change the outcome of your company.”

“The most important thing is to pause. If you know something is really important and you haven’t thought it through, just to say, ‘I am taking this really seriously but I have to pause because I have to think it through from all perspectives. I’m going to come back.’ I end up doing that a lot just because there are a lot of things that you run into that you have never seen before. Most CEO’s, including myself, learn this the hard way. You go ok, I’m going sneak away with this. Nobody’s going to see me give them the raise. I’m going to do it and it’s going to be all under the covers. Confidentiality baby. Then it blows up in your face three weeks later and you’re like, ‘Oh my God. What have I done?’ Or three months later or even a year later. Then once it’s a year later, it’s a huge problem. It takes practice.

Putting yourself in other people’s shoes is difficult. It’s hard in daily life, and it’s even harder in management because it’s the stress at the moment. If a great employee is asking you for a raise, it is very hard for you not to respond because you do not want to lose them and they are not asking you for a raise randomly, they are asking you for a reason. If you don’t have a process in place to stop and back out, you have to pause yourself. If somebody comes to you with something that you know is important, you want to feel like you have all the answers.”

We acknowledge the importance of understanding how our actions will be interpreted. As such, we are eager to create processes that will help us to incorporate multiple perspectives into our decision making.

While we typically don’t need extra encouragement to sneak in a daily workout, we tend to marvel at how much we don’t know about the effect of exercise or diet on the body. Growing up, we viewed nutrition and physiology as roughly akin to physics with regard to the iron laws constituting healthy living. With time, we have come to view diet and exercise science as more similar to economics; frameworks and empirical observation can help, but universal laws are hard to come by.

In that spirit we try to read broadly on the topic in the hope that a well-rounded view may improve our overall framework while leaving room for experimentation. It was with great interest, then, that we read a recent Fast Company article about how the brain reacts to exercise. From the article:

“If you start exercising, your brain recognizes this as a moment of stress. As your heart pressure increases, the brain thinks you are either fighting the enemy or fleeing from it. To protect yourself and your brain from stress, you release a protein called BDNF (Brain-Derived Neurotrophic Factor). This BDNF has a protective and also reparative element to your memory neurons and acts as a reset switch. That’s why we often feel so at ease and things are clear after exercising and eventually happy.” We think studies like this can guide us toward optimal organization of our day-to-day routine. In a perfect world, we will be able to enjoy the intrinsic benefit of a fun workout while also priming our minds for high quality work when we return from the gym.