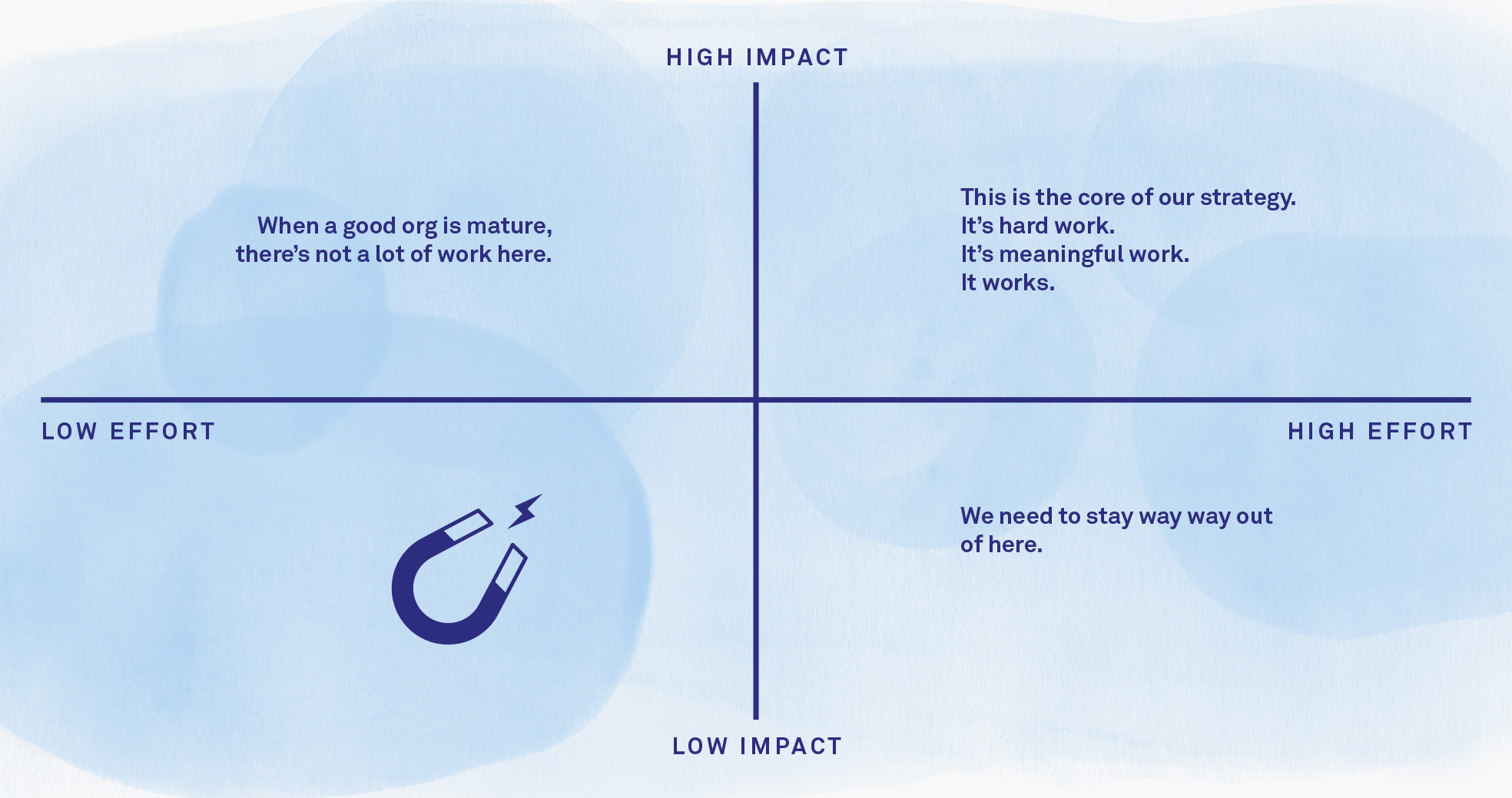 When compared to the early stages of our career, we currently spend a lot more time managing priorities. As a financial analyst the work can be very complex and thought provoking but it typically occurs within a small number of isolated verticals. You identify a potential opportunity, read the 10-k, build a model, perform channel checks, evaluate market pricing and so on. As business owners the work remains interesting but it is much more varied. Any day could be filled up with events as diverse as managing a technology upgrade, reviewing contract language, meeting with customers, updating an employee handbook, evaluating monthly performance vs. budget, and finalizing equipment purchase decisions.

To avoid getting pulled in too many directions we often think about the best way to manage our responsibilities and this week we read a great article on the Intercom blog that suggested grading tasks based on the work:impact ratio using a framework created by venture capitalist Hunter Walk. We can think of plotting our tasks on a four quadrant chart that moves from high to low effort and high to low impact. The key is to limit low impact work even if it can be done easily. From Intercom: “The high-effort, high-impact work reflects the strategy you’re deliberately deploying. Everyone’s favorite quadrant is the low-effort, high-impact stuff. But when you continually pick the low-hanging fruit, the branches will stop growing, so this work dries up quickly as your product and team matures. Most startups are sensible enough to avoid the high-effort, low-impact work, so it’s the last quadrant that’s worth talking about.

It’s the low-effort, low-impact work that can kill you, because it’s so attractive. Hunter refers to it as ‘snacking’. It feels rewarding and can solve a short term problem, but if you never eat anything of substance you’ll suffer. This work is easy to justify because ‘it only took 30 minutes’. And when it achieves nothing useful, it’s easy to excuse because it ‘took us so little time’. This is not strategy – this is flapping. Do this enough times and you’ll grow a low impact team that doesn’t achieve anything.”

When viewed using this framework, we can definitely think of times when we have been pulled toward the lower impact items on our to-do list in an effort to feel productive. Going forward we’ll be more careful to ensure our work consists of full meals rather than snacks.

As keen observers of the impact technology is having on corporate talent management, we were interested to read this week about substantial changes in Goldman Sachs’ recruiting procedures. In an effort to find more committed junior employees, the firm announced Thursday it is revamping the way it interviews candidates for its highly coveted Summer Analyst positions (which typically lead to full time banking positions).

Previously, the firm conducted in person interviews at a select number of elite schools (i.e., Harvard, Stanford, Princeton). Individuals – no matter how capable – who did not attend those schools were essentially shut out of the recruiting process. Furthermore, the rigor of these on-campus interviews could vary widely, with recruiters often ranking candidates based on shared experiences (i.e., college athletics, fraternities, undergrad major, previous internships) or quantitative measures (GPA) rather than capability and authentic professional interest. As a result, the bank found itself in the unenviable position of spending copious resources recruiting and training high pedigree candidates, only to have many leave after 1-2 years on the job.

This week, in an effort to find candidates who are not only capable – but also committed to a long term banking career – Goldman announced it will no longer conduct first round interviews on campus. Instead, all candidates will be required to complete a video interview, answering standardized software program prompts. Goldman recruiters will review the videos, and second round candidates will be invited to a “super day”, which consists of in-person interviews at corporate offices.

Edith Cooper, global head of human capital management at Goldman Sachs believes this approach will “level the playing field” for recruits from non-elite schools, while creating a process with “consistent rigor” and allowing recruiters to conduct “significantly” more first-round interviews. Russell Horwitz, co-chief operating officer of the securities division, told the Wall Street Journal that if recruiters are “going to invest the time to attract people, they want to make sure they’re getting a higher likelihood of people being here longer and having a strong career…. having access to a broader funnel of candidates, and thinking differently about experience and background, is just a better investment.”

In addition to these changes, Goldman is also evaluating more resume screening technology and the use of personality tests to optimize for candidates with high “grit”, “judgement”, and “problem-solving” traits. Since Goldman currently has an acceptance rate of 3% – lower than the acceptance rate to Stanford, Harvard, and Yale – changes to its recruiting process are a big deal in the HR world. In some ways the firm is a victim of its own success. Every company wants to generate massive application numbers, but actually evaluating that many potential employees is a significant HR challenge. While clearly there is an efficiency angle to Goldman’s new initiative, many of these changes seem to be a tacit admission that previously useful filters are not as effective at scale or that their correlation with subsequent job performance is breaking down. Standardizing the top of the funnel, expanding the list of potential filters, and using quantitative tools to manage the resulting data may go long way to solving both problems.

As enthusiastic supporters and users of HR technology ourselves we have found the insights gained from systematic testing to be invaluable. We are eager to monitor how the use of such initiatives evolves at larger businesses while we continue to find interesting smaller scale applications.