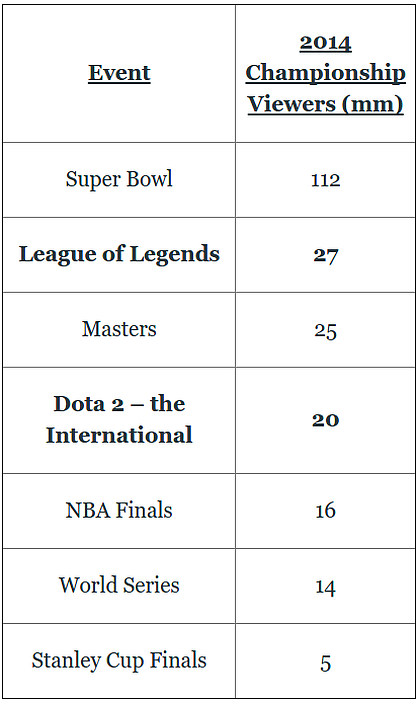 Weekly Thoughts: The Future of Work, What Makes a Subaru and Dota What?

The Future of Work

The Government Accountability Office recently released a new report highlighting that contingent workers now comprise 40% of the U.S. workforce. While the contingent worker cohort includes everyone from part-time bartenders to day laborers to highly paid freelance business consultants, each with vastly different earning prospects, the growth of this group in the aggregate indicates that the nature of work in America is changing in profound ways.

While Uber and other champions of the contingent economy highlight the flexibility and freedom associated with being an independent contractor, part of the problem with contingent labor is that workers aren’t necessarily trading a full time position for an equal amount of working hours or income. For a variety of reasons, people are turning to contingent labor by necessity rather than choice, forcing economists and other labor market analysts to seriously consider a future without work. From a recent article in The Atlantic that covered this issue in depth:

“The U.S. labor force has been shaped by millennia of technological progress…. Throughout these reshufflings, the total number of jobs has always increased. What may be looming is something different: an era of technological unemployment, in which computer scientists and software engineers essentially invent us out of work, and the total number of jobs declines steadily and permanently.“

It is certainly true that technology creates some new jobs, but the simple reality is that the most common jobs in the country are those highly susceptible to automation, either now or in the future. The most frequently occurring male occupation in the United States is truck driver, a profession likely to be made obsolete as Google’s self driving technology evolves. In addition, today’s technological innovation is extremely labor efficient. Again from The Atlantic:

“In 1964, the nation’s most valuable company, AT&T, was worth $267 billion in today’s dollars and employed 758,611 people. Today’s telecommunications giant, Google, is worth $370 billion but has only about 55,000 employees—less than a tenth the size of AT&T’s workforce in its heyday.”

While the trend toward less available work has been highlighted frequently in recent years, there remains considerable uncertainty about the impact this dynamic will have on the economy, the concept of employment, and on the social fabric of the country. In addition to basic income and the production of goods, for many people, work is an activity that provides meaning and purpose in their life. As such, while automation can be destructive if displaced workers resort to watching TV on the couch, it could also free people from mundane jobs and allow them to find a sense of identity and fulfillment in new areas more aligned with their talents or passions.

We believe the trend towards a contingent workforce will have a lasting impact on the business landscape of the future. We will continue to monitor its development closely to see how we can contribute towards an outcome that is mutually beneficial for owners and employees alike.

What Makes a Subaru

Anyone generally familiar with the TV advertisement landscape knows that “love” is what makes a Subaru, a Subaru. As we found out this week in an interesting Bloomberg article, the company’s commercials, often featuring children and dogs as prominently as the cars themselves, have generated tremendous brand enthusiasm, positioning this small manufacturer as one of the fastest growing and most profitable in the industry. Since 2011, Subaru’s 44% growth in unit volume is matched by a 9% net income margin which handily beats industry heavy weights Toyota (8%), BMW (7%), and Ford (2%).

Despite its recent success, Subaru’s 931,000 unit sales is tiny in relation to the global car market. The company is also fast approaching its production capacity, forcing a management decision regarding the future of the company. From the article:

“It’s true that for most carmakers, simply ramping up production is a no-brainer. The economic model is straightforward: The fixed costs in making cars, from engineer salaries to metal-stamping machines, are so large that the more units a company can spread those costs over, the more profit it can make per vehicle. Push out 10 million vehicles a year and all the extras from your suppliers—seats, air bags, mats—come at a discount.

Volume, however, has its drawbacks. If a company outruns demand, a string of reactions unfolds that ends in a very dented reputation among consumers. First, profit gets pinched, as prices are cut and incentives are added to move the excess metal. Friction builds between dealers and the manufacturer over whose margin should be sacrificed. Meanwhile, the discounting weighs on resale values, which can turn off prospective buyers.”

Industry analysts indicate that Subaru could easily sell 30% more cars based on the number of online inquiries into the brand. However, the company has traditionally eschewed rapid production growth in favor of better dealer relations and higher re-sale values. As a result, the brand retains a cult-like status that management is wary of harming. Again from the Bloomberg article:

“In other words, Subaru may be growing so quickly and selling so many cars precisely because it doesn’t sell that many cars. ‘It’s the this-isn’t-a-Toyota appeal,’ he says. ‘And it’s a balancing act. Do you lose what the Subaru brand is if you chase volume and broaden your lineup?'”

We are fascinated by complex problems like the one Subaru is wrestling with currently. The brand’s production capacity dilemma is also an indication that growth for growth’s sake is not necessarily an end in itself. As successful operators in a highly competitive space we hope to learn from Subaru management’s example. It seems that good business sense, in addition to love, is what really makes a Subaru, a Subaru.

This week, ESPN Magazine introduced us to the fascinating world of eSports. While some may scoff at the notion of considering “gaming” serious sport, we were shocked to find how substantial this industry has become. Although we suspect many of our readers may not have heard of League of Legends, Dota 2, Call of Duty, or Smite, this emerging industry bears close watching.

The growth in eSports has been nothing short of tremendous. Over the past 20 years, Major League Gaming – a leading professional eSports organization – has gone from hosting small events in hotel ballrooms to holding some of the world’s largest tournaments. For example, the 2014 League of Legends Championship sold out the 40,000 seat World Cup Stadium in Seoul, while also drawing an online audience of 27 million viewers. The table below helps put viewership levels in context: With an estimated 205 million people having either watched or played eSports in 2014, and 89 million eSport “enthusiasts,” gaming has truly become a global phenomenon. While historically most popular in Asia (apparently Korea is “gaming-mad”), today, North America and Europe have an estimated 28 million eSports fans. And this growing fandom has attractive demographics: In America, an estimated 40% of fans are female, 44% are parents, over 50% are employed full-time, and 72% are under the age of 35 years old.

As a result, gaming has increasingly become a big business opportunity. The world’s largest companies (e.g., Coke and Nissan) provide sponsorship dollars for large events; the prize money associated with international gaming competitions is often in the millions of dollars; professional gamers can expect to earn hundreds of thousands of dollars annually; and colleges are starting to provide scholarships to gamers. Whether or not you consider gaming a “real sport,” it’s hard to not admire its success. To that point, the industry isn’t too concerned with whether or not it attracts the typical American sports viewer. As Mike Sepso, President of the Major League Gaming noted, “We don’t really need people over 40. They’re still watching baseball and football.”

These insights into the world of eSports are a delightful reminder to stay open-minded. Just weeks ago, we might have laughed at the notion of competitive eSports as a serious profession. Today, we are wondering if our kids should be studying Dota 2 strategy instead of taking squash lessons.