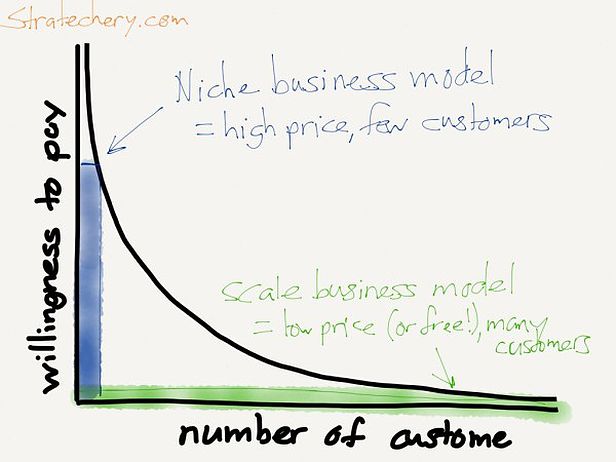 Last week we spent time discussing the potential value of well performing niche businesses that are overlooked due to their lack of scalability. We spent more time reading about the concept this week as we believe there is a broader story to tell.

In a post on his Stratechery blog, Ben Thompson notes that many analysts, particularly in the technology sector, are conditioned to think at scale. “Can it Scale?,” is the impulsive first question when anyone hears of a new product or service. Certainly scale has its merits, but there is actually another viable business model for new products or services. While companies like Amazon or Facebook are the poster children for a scale-based business model oriented around charging low prices to a large audience, a niche business model that charges higher prices to fewer customers for a highly desirable product can also achieve success. Represented graphically, the distinction between these two business models with respect to customer base looks like this: The New Yorker recently published an article highlighting craft breweries as a wonderful example of the niche business model in action. From the article by Tim Wu:

“Consider the story of craft beer. Large-scale breweries destroyed their smaller rivals in the twentieth century because they were able mass produce the stuff for cheaper (reaching wholesale prices of about fifty cents a beer or less) and because their fat margins allowed them to pay for things such as television advertising…

But the small breweries came back. Their beers were not better advertised and certainly not better priced. Rather, the crafts went after an enormous blind spot for the big breweries—namely, flavor. I don’t entirely mean to be snide; more precisely, craft beer succeeded by opting not to compete directly, instead pursuing what can be called a ‘true differentiation’ strategy. That means they established a product that, in the mind of the consumer, is markedly and undeniably different (as opposed to ‘false differentiation,’ which is more or less the same thing with different packaging). True differentiation, if it works, actually changes consumer preferences. The dedicated craft-beer drinker, once he’s hooked, no longer cares if Coors Light costs three dollars less.“

From an investment perspective, the concern with niche businesses is that while they may operate effectively, their growth prospects may be limited. There are exceptions—one could argue that Apple has always followed a true differentiation strategy even though it now has many imitators—but overall, for every Sam Adams that achieves national acclaim, there are many more microbreweries known only to those in the region immediately surrounding the facility.

While a company can do just fine sticking to its small niche, we increasingly believe that technology, specifically the internet, is slowly eroding the growth barrier for these types of businesses. Moreover, as Tim Wu noted in the New Yorker, the creativity and reinvention implied by increased pursuit of truly differentiated products and services “is a cause for great optimism” about the long term health of the economy. We fully endorse this trend and hope to play our small part in its evolution.

Despite all of the seemingly obvious factors that go into career success (hard-work, educational pedigree, connections, some luck) we recently heard of scientific studies that demonstrate that up to half of the predicted difference in career “success” (i.e., promotions, compensation, industry recognition) is due to one, single variable: having a large open network. Business Insider explains some of the research:

“The bottom line? According to multiple, peer-reviewed studies, simply being in an open network instead of a closed one is the best predictor of career success. In the chart, the further to the right you go toward a closed network, the more you repeatedly hear the same ideas, which reaffirm what you already believe. The further left you go toward an open network, the more you’re exposed to new ideas. People to the left are significantly more successful than those to the right.”

Why does this work? Business Insider explains:

“To understand the power of open networks, it’s important to understand their opposite. Most people spend their careers in closed networks; networks of people who already know each other. People often stay in the same industry, the same religion, and the same political party. In a closed network, it’s easier to get things done because you’ve built up trust, and you know all the shorthand terms and unspoken rules. It’s comfortable because the group converges on the same ways of seeing the world that confirm your own.”

In contrast, “People in open networks have unique challenges and opportunities. Because they’re part of multiple groups, they have unique relationships, experiences, and knowledge that other people in their groups don’t. This is challenging in that it can lead to feeling like an outsider as a result of being misunderstood and under-appreciated because few people understand why you think the way you do. It is also challenging, because it requires assimilating different and conflicting perspectives into one worldview.”

Despite the challenges, having an open network can offer significant advantages. These include having a more accurate view of the world (research shows that people with open networks are better forecasters than people with closed networks), an ability to control timing of information sharing (to leverage first mover advantage), an ability to connect groups, and a higher chance of having creative/breakthrough ideas (studies have shown that open networks enable people to create atypical combinations). Steve Jobs opined on this subject in a 1995 Wired interview:

“Creativity is just connecting things. When you ask creative people how they did something, they feel a little guilty because they didn’t really do it, they just saw something. It seemed obvious to them after a while. That’s because they were able to connect experiences they’ve had and synthesize new things. And the reason they were able to do that was that they’ve had more experiences or they have thought more about their experiences than other people. Unfortunately, that’s too rare a commodity. A lot of people in our industry haven’t had very diverse experiences. So they don’t have enough dots to connect, and they end up with very linear solutions without a broad perspective on the problem. The broader one’s understanding of the human experience, the better design we will have.”

As we continue our business adventures, we endeavor to engage in experiences that expand our networks, despite the reality that those experiences may cause discomfort in the short term.

People, Process and Product. Those are the three P’s to business success according to Marcus Lemonis, host of the hit CNBC show, The Profit. Unlike the start-up focused Shark Tank, The Profit centers around failing small businesses, with Marcus acting as both investor and operator should he decide to strike a deal. Although it is a little heavy on the drama at the expense of the business fundamentals, it is fun to watch Marcus attack the three P’s every episode and turn the company around in doing so.

We have adopted Marcus’ alliteration when evaluating business opportunities ourselves, and were interested to read an HBR piece this week pitting two of them against each other in the context of innovation. The article, “Is Innovation More About People or Process?,” looks at various businesses, all renowned for their ability to innovate continuously, to see what is more important: the idea, or the person behind it. Unsurprisingly, consensus is evenly split on the topic. Pixar’s Ed Catmull and LVMH’s Bernard Arnault are adamant in their emphasis on people above all else, with the latter saying “Our whole business is based on giving our artists and designers complete freedom to invent without limits.” On the other side, companies like Intel, P&G, and Lego are credited for establishing structure around the innovation process, codifying it and replicating it throughout the organization.

It’s not hard to see the distinction between these two camps. The “People” proponents are in what we think of as creative industries—arts, entertainment and fashion—while the “Process” supporters are in engineering-oriented industries. Thinking up Toy Story might seem more original than a new Pentium chip, but in practice, both are equally innovative, and that is the key; both groups have found ways to innovate in the context of their needs, and when you look a little closer, people AND process have a roll in each.

Ed Catmull said simply that “talent is rare,” yet one of the biggest drivers of success at Pixar, dubbed The Braintrust, is a structured meeting in which candor is essential among all participants. “Early on, all our movies suck,” says Catmull, and it’s The Braintrust that gets them “from suck to not-suck.” The exact inverse is apparent at Intel, where a seemingly process driven innovation engine relies heavily on people: “Long before projects…achieve their crucial ‘Eureka!’ moment in the clean rooms, Intel does four things: It defines its crucial challenge correctly, it puts the right people on the problem, it knocks down the barriers between R&D and manufacturing, and it gives researchers the right mix of autonomy and guidance.”

For us, the people versus process debate is more akin to a distinction without a difference. Regardless of industry, both have a key role in innovation, and their combination is multiplicative rather than additive. When concentrating on operational issues, we will remember that people and process (and product!) need to be cultivated and refined simultaneously.