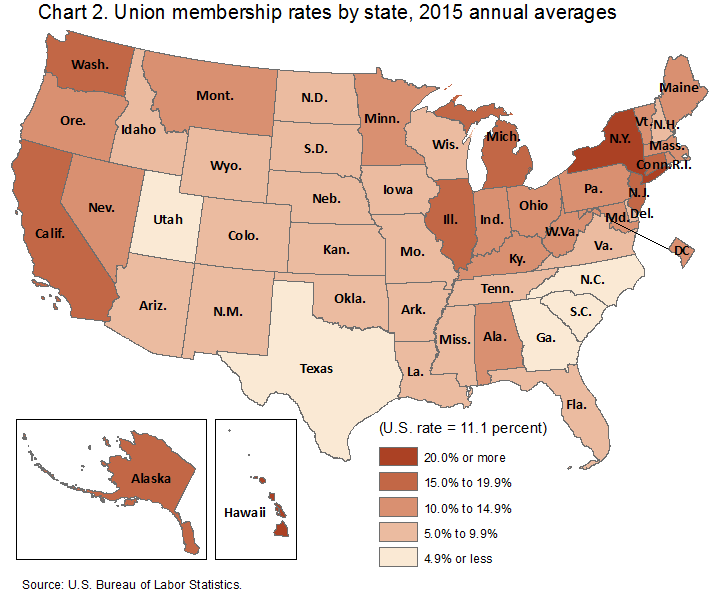 As is hopefully made clear by the diversity of topics covered in Weekly Thoughts, we enjoy the process of making connections between seemingly disparate data points. As such, a recent Harvard Business Review article titled The Surprising Connection between 1930s Weather and Today’s Labor Unions piqued our interest. In this research, HBS finance professors Lauren Cohen and Christopher Malloy, along with Quoc Nguyen, professor at University of Illinois at Chicago, set out to understand why some states have more heavily unionized workforces than others. Why, for instance, do New York and California have high union representation while Texas does not? The professors observed that although state level union participation varied before and after the 1930s, union geographic density has remained largely consistent from 1939 through today. As Professor Cohen explained to HBR, “it turns out there was something that happened in the 1930s that set the rank of unionization in place across states in the United States, and that rank has stayed roughly the same ever since.”

That something, it seems, is weather. In their research, titled The Impact of Forced Migration on Modern Cities: Evidence from 1930s Crop Failures, the professors found that the droughts of the 1930s were a key driver behind the large differences in state union participation that still persist to this day. As Grapes of Wrath readers will recall, during the 1930s the Great Plains suffered through the so-called Dust Bowl, a series of severe dust storms and droughts that decimated crops and caused millions to leave their homes and migrate to other parts of the country in search of employment. The map below shows which areas were impacted most:

While Dust Bowl victims fled their homes, the prolonged Great Depression meant that jobs of all types were scarce, even in areas with normal rainfall patterns. By evaluating a combination of historic rainfall, crop failure, interstate migration, and firm-level unionization data, the professors found that during drought years, unionization levels in non-drought areas sharply increased along with increases in migration rates. Cohen explains:

“Let’s say you were a subsistence farmer…. The drought dried up your crops. You still had to feed your family. So you traveled to the closest city and tried to get a job. Of course, that put pressure on people who did have jobs. They were working for a dollar an hour, and you were willing to come and do the same job for 50 cents. So the people who had jobs said, ‘Let’s unionize to make sure these farmers don’t take our jobs.’”

As seen in the Bureau of Labor Statistics chart below, the impact of this drought-migration-unionization phenomenon persists to this day in industries where migrants found jobs during the Dust Bowl (i.e. manufacturing not teaching). Even when controlling for identical jobs and industries, union participation still varies widely from state to state, accounting for 20-25% of employed residents in some states, to 3-5% in others. Cohen explains the phenomenon simply, noting that “droughts caused migration. Migration caused pressure on the current workforce. Pressure caused the workforce to unionize. And that unionization just has an incredibly long tail.”

Sometimes a particular piece of research will catch us blindly accepting the status quo without attempting to understand its root causes. We took for granted that California was a strongly pro-labor state and Texas was not, and were interested to consider that weather, of all things, may have played a significant role in shaping the current political landscape. More broadly, the professors’ observations are a reminder of the importance of second-order effects. Going forward, we understand that the quality of our analysis in any situation will depend largely on our ability to anticipate not just the primary impact but the knock-on result as well.

As long time fans of Tim Ferriss’ podcasts, we recently listened to an interview he did with Walter O’Brien, an Irish-born child prodigy known primarily for his alleged IQ of 197 (the 4th highest ever recorded, and for reference, 37 points higher than that of Albert Einstein). Questions about his history and business ventures abound, but what piqued our interest was O’Brien’s comment that his biggest challenge to success was overcoming his intelligence. It sounds counterintuitive, but O’Brien anecdotally corroborated research conducted by the Carnegie Institute of Technology which found that “85 percent of your financial success is due to skills in ‘human engineering,’ your personality and ability to communicate, negotiate, and lead. Shockingly, only 15 percent is due to technical knowledge.”

It is important to note that intelligence is separate and distinct from “smart.” IQ — or intelligence quotient – is reflective of the brain’s processing power and speed, but conveys nothing about one’s ability to direct that intellect effectively. O’Brien likens a high IQ to a high horsepower motor — without steering or brakes it is all but useless. In that analogy, emotional quotient (EQ) is the car that surrounds, and controls, the motor.

While IQ was developed by researchers in 1904, EQ is relatively new. Coined by researchers in 1990, the phase was popularized by psychologist Daniel Goleman’s 1995 hit book aptly named Emotional Intelligence. Since then, research has underscored the importance of EQ over IQ, repeatedly reporting that individuals with high EQ are more financially successful, healthier, and have greater life satisfaction than their low EQ counterparts. Furthermore, when Nobel Prize winner Daniel Kahneman conducted research on this subject, he found “people would rather do business with a person they like and trust rather than someone they don’t, even if the likeable person is offering a lower quality product or service at a higher price.”

Research indicates that three key emotional qualities determine whether or not an individual has high EQ. The first is self-awareness. A Fast Company article highlights that self-awareness is more about balance than it is about modesty, emphasizing that self-aware people are “neither overly critical nor unrealistically hopeful.” The second is the ability to self-regulate emotions. Someone with this ability resists the urge to overreact to both positive and negative stimuli, instead waiting to respond “from a place of reason.” The third and final trait – empathy – is probably the most important. This quality is most intensely associated with EQ because it demonstrates an awareness of other’s feelings and the ability to consider those feelings when acting yourself. Importantly, empathy does not mean an inability to make tough, unpopular decisions. Rather, it means that you understand and acknowledge the impact you have on others.

Despite all the positive elements, it is possible to have too much of a good thing. Just as Walter O’Brien struggled at times with too little EQ, it is also possible for high EQ people to demonstrate malicious, manipulative tendencies. The Atlantic explains further:

“Austrian psychologists reported a correlation between EQ and narcissism, raising the possibility that narcissists with high EQ might use their ‘charming, interesting, and even seductive’ qualities for ‘malicious purposes,’ such as deceiving others. Similarly, a 2014 study linked ‘narcissistic exploitativeness’ with ’emotion recognition’—those who were prone to manipulating others were better at reading them.”

Ultimately, the lesson is that all people have different strengths and weaknesses and that we must work at all aspects of our personality to be the best version of ourselves. We have written previously that for us, one of the appealing aspects of small business investing is the combination of IQ and EQ related challenges. We understand that some work requires high IQ (quantum physics) while other endeavors require high EQ (sales). Identifying those traits and creating teams with balanced attributes will be a key step towards increasing the probability of our success.

Last fall, we wrote about iconic New York restaurateur Danny Meyer’s quest to eliminate tipping and implement a “hospitality included” (“H.I.”) policy across his Union Square Hospitality restaurants, a move which has since been emulated by multiple New York restaurants. This week, we were pleased to hear an update on how the venture has fared to date.

As a reminder, Meyer has set out to fix what, in his opinion, was an unsustainable and unfair allocation of total compensation. Due to the widespread cultural practice of tipping in American restaurants and regulations that prohibit the sharing of tips with kitchen staff, the last several years have witnessed significant stagnation in kitchen wages despite dramatic increases in server wages.

H.I. started last November at The Modern, Meyer’s two Michelin star restaurant at the Museum of Modern Art. So, how has it gone? Structurally, H.I. meant kitchen wages increased 20%, with the lowest-paying jobs now starting at $12 an hour and cooks at $14 an hour. Dining room staff now receive a base hourly wage of $9 an hour (up from $5 an hour) and participate in a revenue-share program.

After implementing the policy for approximately six weeks, December came in as The Modern’s most profitable month on record. During this time, the average customer check remained roughly the same while customer service ratings increased 12%. Meyer hypothesizes this is due to the fact that customers can focus their meals – and servers can focus on hospitality – without worrying about an underlying quid pro quo.

From an employee standpoint, job applications for the kitchen increased 270%, and 113% for the front-of-house. Meanwhile, turnover in both areas declined. It’s not difficult to see the appeal for kitchen staff. Prior to implementing H.I., many of Meyer’s acclaimed restaurants faced staffing difficulties as the prevailing wage for senior cooks was roughly $24,000 despite the fact that many of these individuals have culinary degrees and at least five years of kitchen experience.

Comparatively, the server response to H.I. is less intuitive. Meyer sheds some light on their response, noting the front of house staff is still making roughly what it made prior to the policy change. Furthermore, the dining room staff now has what can be considered an unprecedented amount of personal flexibility in the restaurant industry: instead of vying for the “big ticket” weekend night shifts, servers can now work lunches or week nights without worrying about the impact on their take home pay. Simon King, general manager at The Modern, explains further:

“So for years, people who have worked those nights, never had a chance to have a weekend off, because they needed to work a Saturday to make their wage. And now, you can work Monday through Friday if you want to. You can work lunches — you don’t have to work all these nights — and still receive the same money, or very similar to before. It’s a colossal change. Some may decide the busy nights is for them. Others may say, ‘well, you know what, having a night with my child — tucking my child into bed is something I’ve never done.’ Maybe something trivial, a lot of people take for granted. It’s something, for me, that’s very special.”

Meyer summarizes the situation by noting The Modern is doing well by “doing the right thing because we have less turnover, we have more applicants, [and] a better product that more people would want to come try.” While it sounds simple, the ex-ante decision to pursue this course amounted to a giant leap of faith made more acute by the razor thin margins under which most restaurants operate. We applaud Meyer’s willingness to find new ways to solve difficult problems. As we consider similar challenges at our own businesses, we hope to follow his lead.