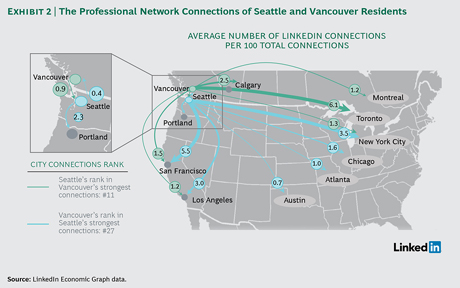 Since a member of the Chenmark team is a native Vancouverite, we keenly follow news coming out of the area. While most Vancouver related conversation centers around underwhelming performances from the Canucks or astronomical real estate prices, we have recently started to see headlines recognizing Vancouver as part of the so-called Cascadia Innovation Corridor. This initiative, named after the Cascade Mountain Range, which extends from southern British Columbia through Washington, centers around ways to better connect Vancouver and Seattle through increased collaboration between corporate, nonprofit, and public sector entities.

Led by regional government, business, and academic leaders, the movement has grown out of an observation that despite being only 140 miles (225 kilometres) apart and sharing many cultural similarities (i.e., a lot of bike lanes, rain jackets and kayaks), the cities are surprisingly isolated. For instance, according to a report conducted by the Boston Consulting Group, only 1% of Vancouver’s LinkedIn members have connections to members in Greater Seattle. Similarly, Vancouver members account for less than 1% of Seattle connections. The chart below from BGC highlights how Seattle is more professionally connected to Atlanta than its fleece-loving neighbor to the North:

The lack of connectedness matters because it represents a missed opportunity. Since each “innovation” worker creates, on average, five peripheral jobs, and denser social networks can improve labor productivity through enhanced information flow, a regional doubling in population can lead to a 2.3x increase in patents, wealth, and total output. BCG summarizes the issue, noting “the lack of connectedness between Seattle and Vancouver, therefore, not only directly constrains each city but also impedes each one’s ability to boost the other, particularly in sectors in which both cities excel.”

There are several examples of cities which leverage their proximity by establishing collaborative relationships, with multiple stakeholders working together to share human capital and infrastructure support (i.e., the Greater Copenhagen and Danish Skåne Region, Helsinki and Tallinn, San Francisco and Silicon Valley, North Carolina’s Raleigh-Durham-Chapel Hill “Research Triangle”). The Cascadia Innovation Corridor is the Northwest’s attempt to bridge the collaboration gap in a mutually beneficial way. Vancouver sees the partnership as a way to bring corporate anchors and high-paying jobs to the area while also setting the stage for spin-off entrepreneurial activity (Vancouver has attracted significantly less venture funding than Seattle). Companies in Seattle see it as an opportunity to access talent (foreign workers can obtain work visas in Canada approximately three times faster than in the United States) and operate in a more favorable tax environment. BCG again:

“Their individual strengths in a number of areas complement each other, and if developed jointly, these strengths could generate greater economic and social gains for both. Through unified action, the two cities could establish self-perpetuating innovation ecosystems able to compete on a global scale.”

At a recent conference featuring a keynote from Bill Gates, political leaders from both British Columbia and Washington signed an agreement to formally deepen ties between the cities, agreeing to work together on technology, research, education, workforce development, transportation, and investment. The conference also resulted in a formal memorandum of understanding between the Seattle-based Fred Hutchinson Cancer Research Center and the B.C. Cancer Agency for collaboration in cancer-focused clinical trials and in public health science. Other proposals under development include creating formal research collaboration between the University of British Columbia and the University of Washington, building a high-speed rail between Vancouver and Seattle (which would cut travel time from four hours to one), establishing regional venture capital funds, and initiating partnerships between companies in similar industries (both cities have strong gaming communities).

On the corporate side, the Corridor is merely a formalization of activities currently underway. For instance, Boeing recently opened a data analytics and software development laboratory in Vancouver, and Microsoft just invested $120 million into its Vancouver offices, where it plans to hire 750 people and has budgeted $90 million for annual wage and operating costs.

We believe that the development of the Cascadia Innovation Corridor represents a tremendous opportunity for all stakeholders and are optimistic that the initiative will provide lasting and meaningful tailwinds to both cities. More generally, we believe the Corridor, like other regional collaboration efforts, demonstrates how teamwork and idea sharing can create a whole that is greater than the sum of the parts, a dynamic the Chenmark team tries to create both internally and within our portfolio companies.