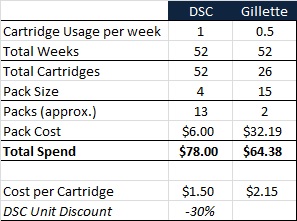 As consumers, our attitude towards razors could be described as apathetic at best. We long ago lost interest in keeping up with the latest quintuple-plus “Fusion” technology, opting instead for the same triple blade model we have had since high school. However, we were recently shaken from our lack of enthusiasm on the subject when we heard about Unilever’s recent acquisition of Dollar Shave Club for $1 billion. We found this deal fascinating and what follows is a rough chronology of our thoughts on the subject:

Am I Missing Out?

We’ll admit it. Our immediate response was FOMO driven. We are not Dollar Shave Club (“DSC”) members and the deal news made us panic that we might be missing out on something big. So, we started to consider what a switch to DSC might mean for our annual razor spend.

Currently, our method for dealing with high razor prices is to buy the maximum number of Gillette Mach3 cartridges in bulk a few times a year and to ration them aggressively. A switch to DSC would mean blades arrive in the mail monthly, almost forcing a more regular disposal of old blades. This would undoubtedly result in an improved shaving experience but might also create a higher annual spend despite a lower per unit cost. The table below highlights our rough estimates of how our razor usage and spend might evolve (pricing data from Amazon and DSC): While everyone’s shaving experience is likely different, if these estimates can be generalized at all, DSC has pulled off something of a consumer coup. The company rose to fame on the back of its witty tongue-in-cheek commercials which found ways to highlight the largely price-based flaws in competing business models. Most discovered the brand when CEO Michael Dubin pointed out the lunacy of giving $19 of ones’ $20 razor cartridge spend to famous tennis players (sorry Roger). What is less obvious is that while the company has acquired subscribers through its emphasis on a discounted unit cost and convenience, it is entirely possible that DSC is creating a higher lifetime value customer by nudging users toward higher turnover. That’s a neat trick.

Its marketing prowess notwithstanding, in the traditional world of cash flow-based valuation and asset-based lending, the DSC transaction makes no sense. This is a company with no manufacturing capability, no distribution, and no profits, that managed to convince a buyer it was worth five times sales. In some respects, the only thing there is the shiny veneer of a brand that is good at making kitschy internet videos.

However, what this more antiquated approach misses is that in today’s interconnected business environment, those YouTube videos, and more importantly the customer engagement they create, are everything. Attract the customers and you can find partners to help with the rest. As the New York Times noted:

“Dollar Shave Club has over three million subscribers but only about 190 employees. Its razors were made in South Korea by Dorco. Distribution was initially handled in-house but eventually was contracted to a third-party company in Kentucky. What remained was a terrific design, marketing and customer service shop; and a business that was easily expandable to meet demand and that had a good niche with men who do not like to shop.”

The scalability factor is what has allowed DSC to gain 16% of the razor market in four short years, largely by taking share from Gillette which controls 70% of the market but was purchased by P&G for $57 billion. On a cost per point of market share then, as Stratechery’s Ben Thompson notes, “Probably the most important fact when it comes to analyzing Unilever’s purchase of Dollar Shave Club is the $1 billion price: in the world of consumer packaged goods (CPG) it is shockingly low.”

What Can I Learn?

The valuation discrepancy between DSC and Gillette exists largely because the former isn’t weighed down by legacy marketing and distribution overhead that has left the latter in a sub-optimal competitive position further away from the customer. DSC is one of several newer companies that effectively leverage technology to respond rapidly and deliver an optimized user experience. Again from the New York Times:

“By cutting out the inefficiencies of retail space and the marketing expense of TV, the new companies can offer better products at lower prices. We will get a wider range of products — if companies don’t have to market a single brand to everyone on TV, they can create a variety of items aimed at blocs of consumers who were previously left behind. And because these companies were born online, where reputations live and die on word of mouth, they are likely to offer friendlier, more responsive customer service than their faceless offline counterparts. ‘We think it’s a unique moment in history where you can create brands that can be scaled quickly thanks to technology, but you can still maintain a one-to-one connection that delivers an elevated level of customer experience,’ said Philip Krim, chief executive of Casper, which sells mattresses online.”

In our investments, our preference for lower valuations and long operating histories means that we are unlikely to pursue a high growth e-commerce type opportunity. However, that doesn’t mean we can’t learn a lot from DSC’s strategy. While we spend significant time focusing internally on our asset base or the refining of our product or service, we must keep in mind that the best modern companies succeed because of a relentless commitment to improving their interaction with the customer. David Packman, who led the Series A round for DSC, wrote in a recent blog post that “brands are now built by your customers, not announced to them.” We believe this to be true even for non-tech companies and are actively researching ways to create a similar customer-focused commitment at our portfolio companies.