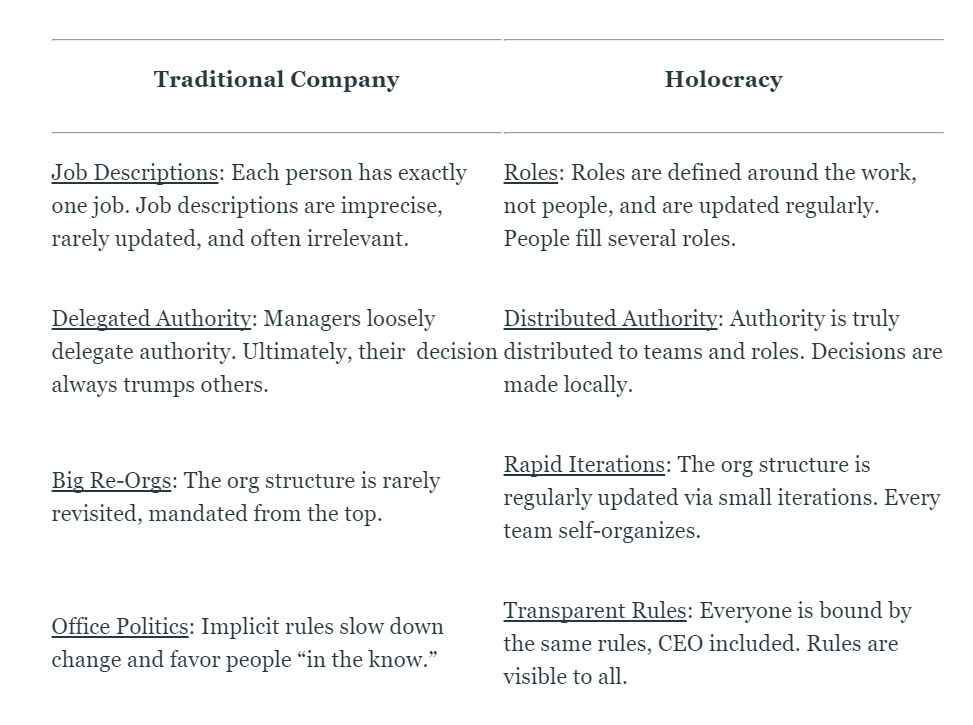 This week we learned more about Holacracy, an increasingly popular “self-management” approach to corporate organization, and pondered ways in which it may – or may not – be applicable to Chenmark’s business activities. Developed by software engineer Brian Robertson in 2007, Holacracy is a free form approach where employees are encouraged to self-organize and self-manage tasks from the bottom up rather than be assigned responsibilities from the top-down. From the Holacracy website:

A Holacratic company, rather than breaking its workforce into departments (i.e., Marketing, Finance, etc.), will organize employees into a series of overlapping teams (called “circles”) which have focused responsibilities, accountability, and governance. For instance, online shoe retailer Zappos, the most high-profile adopter of the Holacratic method, shifted from having 150 departmental units into having 330 “lead links” who are responsible for 500 “circles”. The thought process behind this approach is that a series of overlapping circles allows an organization to be more responsive and adaptive to business needs than is allowed for in traditionally siloed departments.

From an operational standpoint, Holacracy driven teams agree to govern themselves within an established operating agreement (dubbed a “Constitution”) which outlines specifics such as how circles are formed and disbanded, how roles and responsibilities are assigned, and how meetings operate. From a leadership perspective, authority changes depending on work content. An individual who is the decision maker of one circle may not be the leader of another. That said, there is a “lead link” within each circle who is responsible for making connections amongst circles (i.e., recruiting circle would be linked to the compensation circle). The Holacracy website further outlines some key differences: Proponents of the holacratic approach argue that it allows for stronger organizations who organically identify and quickly adapt to changing market needs. Many attribute Zappos’ 75% increase in 2015 operating profit to its adoption of the Holacratic method. However, the radical approach is not without its casualties. Despite its financial results, Zappos also saw 18% of its workforce leave in 2015 and dropped off Fortune’s List of Best Companies to Work For. It seems the main downside of the holacratic approach is the complexity that accompanies the constantly fluctuating circles. At Zappos, each employee has an average of 7.4 roles and 11.7 role assignments per day, which can lead to confusion regarding prioritization, coordination, and difficulty surrounding compensation and hiring practices. Social media company Medium stopped using Holocracy, noting “the system had begun to exert a small but persistent tax on both our effectiveness and our sense of connection to each other.” In fact, a common critique of Holacracy is that its governance practices underappreciate the human role in business in an attempt to maximize efficiency. Quartz provides more insight:

“Tactical meetings, as described by the Holacracy Constitution, tightly govern how and when employees can speak up. The meetings, which typically are held once a week, open with a check-in round and then dive into checklists and metrics. The Constitution is clear that there is ‘no discussion’ during the check-in and closing rounds. In other words, there is no natural, back-and-forth conversation that begets camaraderie, respect, trust, and connection. No small talk.”

As Chenmark grows, we often discuss the ideal way to organize ourselves internally, as well as how governance at our portfolio companies should be structured. Traditional corporate dogma suggests each organization should have a clear pyramid-shaped organizational chart, with accompanying job descriptions that clearly outline roles and responsibilities for each position. The reality of a small business is that the day to day range of responsibilities can be more far reaching and fluid than is allowed for in a rigid org chart. For instance, while technically spending his week focusing on searching for new leads, a Chenmark partner may also need to open a new bank account for a portfolio company, evaluate key man insurance, assemble office furniture and finalize equipment purchase decisions. As such, we can see the appeal in having flexible, multi-faceted teams. However, such adaptability should not come at the cost of a blurred overall mission or a lack of team camaraderie. These potential shortcomings make us wary of pursuing a fully Holocratic structure. After all, as we often note, the human element is the triple-O sauce of small businesses success.