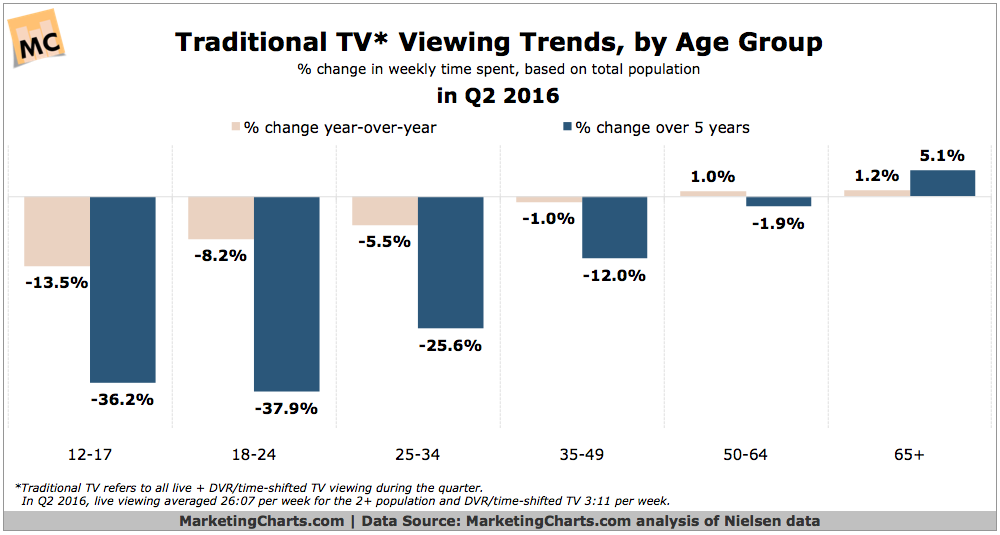 To the chagrin of some members of the Chenmark team, the group spends an inordinate amount of time watching football during the fall. However, we were interested to read that not all households are tuning in as much this year, with national viewership ratings down sharply across the board. The declines are notable — as of last week, ESPN Monday Night was down 17%, followed by CBS Thursday Night (-15%), NBC Sunday Night (-13%), Fox Sunday (-3%) and CBS Sunday (-3%) — and have caught many off-guard since live sports, particularly football, hold such prominence in television programming (in 2015 the NFL held the top 25 programs on television and 46 of the top 50). The ratings dip has caused consternation for league and network executives especially since live sports have become the cornerstone of television business deals. The Wall Street Journal explains further:

“TV networks have spent heavily on sports, and the NFL in particular, because of their must-see nature. While more viewers today watch commercial-free streaming services like Netflix or record shows on DVRs and skip the ads, sports programming primarily is still watched live, making it valuable to advertisers. Combined, ESPN, Fox, NBC and CBS are spending an average of $5 billion a year for football rights through 2021. The games not only score big ratings and ad sales, but are crucial platforms to promote other programming.”

The decline has sparked discussion as to why viewership is weak. Since it seems unlikely that every wife in the country has finally figured out how to wrestle the remote away from their respective husbands (and brothers-in-laws) during football season, the prevailing theory right now is that the decline is temporary, driven by primetime competition from the 2016 Presidential Election (the first two debates occurred on Monday and Sunday nights). This theory is supported by the fact that during the 2000 Presidential Election, all four NFL broadcast partners experienced rating declines. If Trump and Clinton are to blame, there is good precedent for a bounce back as outlined by The Atlantic: “[the 2000 rating decline] was hardly mortal. In the next 15 years, NFL viewership rose 27 percent, even as primetime viewership for other shows and programming fell by more than a third. So perhaps the NFL has suffered a similar blow in the autumn of 2016.”

However, others posit that the decline is the result of technology-enabled structural changes in content consumption. According to Nielsen’s most recent Total Audience Report, while traditional TV is still the dominant form of video consumption, viewing hours have dropped significantly over the past five years, particularly within younger age groups. MarketingCharts.com outlines the change in the chart below: The decline is attributed to an increase in other activities, such as video consumption via streaming. As a result, it’s entirely possible that NFL ratings are down because viewership is becoming increasingly fragmented across various technological platforms (while an NFL fan can watch the game on TV, she can also consume game related content on her tablet, mobile phone, Twitter, NFL.com, and fantasy mobile apps). Since at the moment non-television consumption is not accurately measured (Nielsen does not yet track new platform viewership data), the reported declines should not be as concerning to NFL executives who can still monetize content across various channels. The same cannot be said for traditional television networks who must hope to retain lost cable viewers on a different platform.

The final theory is that football is simply becoming less appealing. It’s possible that a combination of content oversaturation (games are now on Thursdays, Sunday mornings (in London), Sunday Evenings, and Mondays), overblown and polarizing scandals (Deflategate), unappealing off-field conduct (prominent domestic abuse stories), and a rash of surprisingly early retirements due to health concerns (Calvin Johnson, Chris Borland, Patrick Willis) simply make viewers less interested in following the sport, particularly when they have access to an exploding amount of other appealing content.

Although only time will tell which of these theories turns into reality, for Chenmark, the NFL viewership situation presents some compelling business insights. First, it’s imperative that the metrics being used to measure success are accurate reflections of the business and the environment in which it operates. Just as measuring year-on-year winter revenue at our property services company without accounting for annual snowfall levels would undoubtedly result in inaccurate takeaways, it’s also clear to us that looking at traditional TV viewership numbers to gauge interest in the NFL is increasingly antiquated (thankfully next season’s Nielsen report is expected to better incorporate viewership on tablets, computers, and phones).

Second, it’s important for businesses to understand what they are competing against. Just as McDonald’s not only competes against Burger King and Wendy’s but also at-home meal preparation options, the NFL is competing for eyeballs on certain nights of the week not just against other sports, but against all entertainment activities.

Finally, given that the television viewership trends are not new and the Presidential Election happens every four years, the fact that waning viewership numbers caught executives by surprise shows that perhaps the golden era of the NFL has resulted in a certain level of complacency. It’s that type of complacency that may result in the final theory — that people are simply less interested in professional football — becoming reality.