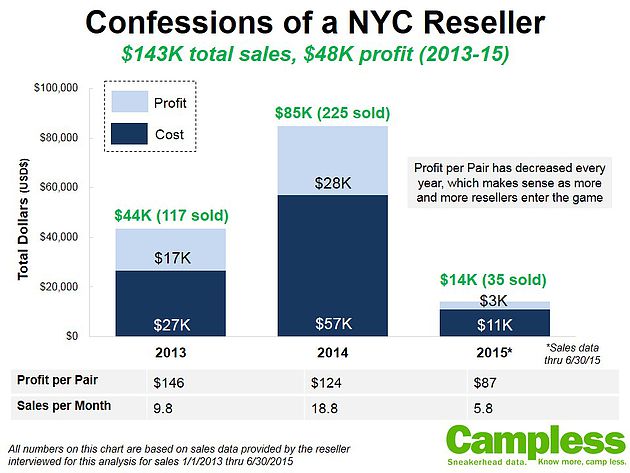 We have written at length about our thesis that small, non-centrally located businesses present compelling investment cases. Part of the value proposition is that we also recognize the pursuit of such deals wouldn’t be practical for a $20bn private equity fund. Even if successful, deals of such size wouldn’t contribute much to the firm-wide bottom line, and from a practicality standpoint, it would simply take too many Wharton and Harvard MBA’s to figure out how to deploy billions of dollars of capital into markets with limited capacity.

The broader point is that across industries, scale is often inversely proportional to the attractiveness and breadth of the opportunity set. Moreover, this institutional friction creates opportunity for those willing to step into the void. While we focus on small businesses, the reality is that niche investing can take many forms, and this week we were interested to read more about the market for secondhand sneakers. In a recent Ted Talk, Josh Luber, self-described “sneakerhead” and founder of Campless – a sneaker data analytics company – introduced us to the “secret sneaker market,” a world where people buy and sell sneakers. Luber explains:

“The Air Jordan 3 Black Cement…. might be the most important sneaker in history. First released in 1988, this is the shoe that started Nike marketing as we know it. This is the shoe that propelled the entire Air Jordan lineage, and perhaps saved Nike. The Air Jordan 3 Black Cement did for sneakers what the iPhone did for phones. It’s been re-released four times. Every celebrity’s been seen wearing it.There’s a site about what to wear with the Black Cement. It’s been right under your nose for decades and you never looked down. And right about now, most of you are probably thinking, ‘Sneakers?’

In 2011, the last time the Jordan 3 Black Cement was released, at a retail of 160 dollars, it sold out globally in minutes. And that’s because people were camped outside of sneaker stores for days before it went on sale. And just minutes after that, thousands of those pairs were on eBay for two and three times retail. In fact, there’s over 1,000 pairs on eBay right now, four years later. But here’s the thing: this happens every single Saturday. Every week there’s another release or two or three, and every shoe has a story as rich and compelling as the Jordan 3 Black Cement.”

Just as there are devotees for golf, wine, and Star Wars, there exists a group of individuals who are deeply passionate about sneakers. For this group, which is largely constituted of 20-30 something year old males, the passion is not brand agnostic. The secondary shoe market is dominated – and controlled – by Nike, which releases extremely limited supply, high-end sneakers on an almost weekly basis to generate enthusiasm and brand loyalty amongst its sneakerhead devotees. These devotees, some of whom may pay up to $8,000 for a pair of particularly special sneakers on the secondary market (i.e., Nike’s 2010 “Back to The Future” sneakers), support brand cache for Nike’s mass market, $60 shoe. The FiveThirtyEight Blog provides some insight into sneakerhead culture:

“Frank Taylor, who is 23 and lives in the Bronx, had already been waiting several hours when I caught up with him. He had come with his friends and had a spot somewhere in the front third of the line. He wore a white hoodie and, standing well over six feet, he towered over the crowd. He said he owns about 150 pairs of sneakers, having collected them over a dozen years.

These days, a lot of people use bots to buy shoes online as soon as they’re released. Others exploit an inside connection; Foot Locker employees are kings in the secondary marketplace. Taylor is old school and only buys retail. Sneakerheads take pride in having bought new shoes from the store, because camping out in long lines shows commitment. ‘You get respect from the sneaker community,’ Taylor said. ‘People are like, wow, how’d you get those?’

While a secondhand sneaker market may sound like a joke, the numbers are extraordinary. According to Luber, in the last year, there were over 9 million pairs of shoes resold in the United States, with an estimated total transactional value of $1.2 billion across more than 48 different online sneaker markets. Given that resale market profit margins average 33%, sneakerheads made roughly $380 million last year alone. To put this in perspective, Skechers – the second largest footwear brand in America – netted $209 million this year. Put another way, this niche, underground market is making considerably more than Nike’s closest competitor!

With a market of this size, it’s not surprising that some entrepreneurial individuals have seen opportunity to create highly successful market making operations. For example, Campless recently posted a blog titled Confessions of a NYC Reseller which provided data on an individual whose primary job is buying and selling sneakers. As supply is the limiting factor in this market, this NYC reseller is known for establishing relationships with a broad network of sellers and for using TaskRabbit to scale his approach by paying people to wait in line for new releases. In strikingly similar language to that used by Wall Street traders, this NYC reseller noted that the majority of his time is “spent figuring out what shoe to buy. It’s a multivariate equation that frequently changes by the second.” The chart below provides insight into this individuals’ P+L statement, which while not massive in scale, demonstrates impressive margins: The other interesting part of this story, in addition to the compelling business model these sneaker market makers are able to establish, is that Nike as the dominant supplier basically allows this to happen. The secret sneaker market only exists because Nike appears to be systematically underpricing and under-producing their most in-demand shoes, a fascinating strategic move since their CEO, Mark Parker, began his career as a designer and continues to have direct involvement in the creation of the company’s two most high profile lines, those associated with Michael Jordan and with Japanese stylemaker Hiroshi Fujiwara. That the company would commit such resources to a project and then effectively share the profits with consumers is revolutionary and provides a fresh take on how large companies can use institutional friction to their advantage.

Nike realizes that the value in niche sneakers lies in their scarcity. As such, there is no way to scale or re-invest in the business line for continued growth. Instead, they have turned limited run shoes into a high-profile brand building effort. Rather than focusing on larger projects, the company has found a way to integrate, protect, and champion small scale opportunities and that appears to be paying dividends as the company continues to dominate the global footwear market. We’ll be sure to follow Nike for inventive ways to tackle our own attempts to scale. In the meantime, we’ll continue to take a page from the sneakerhead playbook, and try to find opportunity where others are less likely to look.