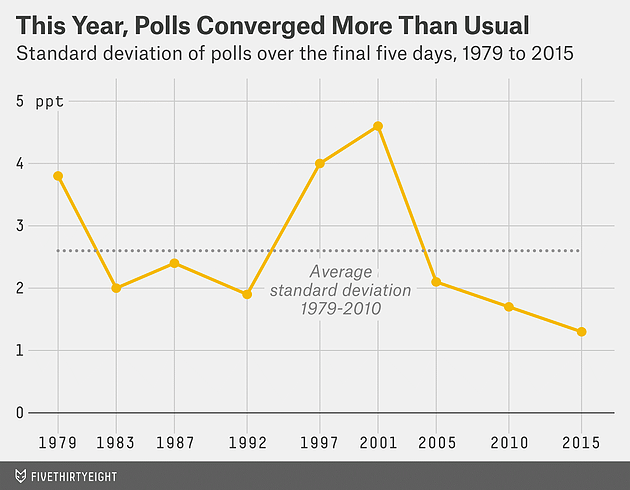 Weekly Thoughts: What Happens in Vegas, Being Elon and Polling Problems

What Happens in Vegas

While Tony Hsieh — CEO of Zappos, the online shoe and clothing retailer — is well known for his remarkable business success, we think his latest project is particularly ambitious. Using his own capital and considerable network, Hsieh is trying to create a thriving entrepreneurial culture from scratch by reinventing downtown Las Vegas, where Zappos is currently headquartered. What is interesting to us, in addition to the sheer scope of the project, is Hsieh’s method for promoting the growth that he desires.

Traditionally, city planners have opted for a “Field of Dreams” approach (i.e. if you build it, they will come) to attracting human capital and fostering economic development. In contrast, Hsieh, borrowing from research by Harvard professor, and noted city scholar, Ed Glaeser, posits that the most robust growth will come from the creation of an environment where entrepreneurial density allows spontaneous interactions to create new opportunities organically. As Hsieh noted in a recent Freakonomics podcast:

“A lot of city revitalization projects are really top-down, master planned, and we’re really anti-that. It’s really more about backing the entrepreneurs and their passions, and so our goal is to help accelerate stuff, help make Downtown Vegas a place of inspiration, entrepreneurial energy, creativity, innovation, upper mobility, discovery and all that combination of creativity and entrepreneurism.”

Hsieh and his team call these spontaneous meetings “collisions.” To maximize the number of “collisions” — a metric that they track closely — Hsieh has spent $350 million on real estate in downtown Las Vegas which, along with venture funding, is made available to aspiring entrepreneurs of all types. As Zach Ware, general partner of the Vegas Tech Fund noted:

“The idea is that when you look at coworking spaces, offices, cities, the magic and creativity that happens in those places is as a result of random encounters and conversations with people you otherwise wouldn’t know to reach out to, couldn’t reach out to, didn’t know existed. It’s engineering an environment to support collisions, to inspire collisions, and being very mindful that a master plan, single idea can be very, very risky, that letting the neighborhood sort of evolve itself is what makes, in our minds, long-term magic happen.”

To be sure, there are significant challenges to overcome before downtown Las Vegas is mentioned in the same breath as Silicon Valley. That said, we’ll be following its development closely to see if maximizing “return on collision” is truly effective as a city planning tool. At the very least, Hsieh has inspired us to think more carefully about the “collisions” we may be able to engineer in our own lives. In this case, we hope that what happens in Vegas doesn’t stay there.

This week, we came across a refreshingly original post on an increasingly unoriginal topic: how to be successful. What is it, Quora users wanted to know, that allows luminaries like Bill Gates, Steve Jobs, and Elon Musk to achieve such extraordinary things? While numerous book and magazine pages have been devoted to this topic, it isn’t often that the public gets an insider’s view. For this reason, we were fascinated to read Justine Musk’s insights into what makes her ex-husband, and others like him, tick.

Ms. Musk begins by highlighting the fundamental truth that achieving extraordinary performance of any sort requires being different. It isn’t surprising, then, that all of the visionary business leaders Ms. Musk has come to know demonstrate some degree of iconoclasm that allows them to see the world in a different way. From the Quora post:

” …if you’re extreme, you must be what you are, which means that happiness is more or less beside the point. These people tend to be freaks and misfits who experience the world in an unusually challenging way….They don’t think the way other people think. They see things from angles that unlock new ideas and insights. Other people consider them to be somewhat insane.”

From this starting point, Ms. Musk emphasizes that the most extreme success only comes to those who are truly obsessed with the problem they are trying to solve, and who have the resilience necessary to manage the inevitable setbacks. Again from the Quora post:

“Be Obsessed. Be Obsessed. Be Obsessed…Don’t pursue something because you want to be great, or for some end reward that is far from guaranteed. Pursue something because it fascinates you, because the pursuit itself engages and compels you. Extreme people combine brilliance and talent with an insane work ethic, so if the work itself doesn’t drive you, you will burn out or fall by the wayside…

[Moreover], The extremely successful do not fear failure — or they do, but they move ahead anyway. They will experience heroic, spectacular, humiliating, very public failure but find a way to reframe until it isn’t failure at all. When they fail in ways other people won’t, they learn things other people don’t and never will.”

When observing the titans of any industry, it is hard to separate process from outcome. While it is difficult to fathom ourselves achieving a degree of success on par with Elon Musk or Steve Jobs, Ms. Musk’s unique perspective reinforces our belief that if we obsessively work toward our goals and resolve to work through inevitable setbacks as they occur, we will end up in a good place.

The Conservative Party won a majority in the U.K. election earlier this month. While this outcome isn’t particularly surprising, the scale of their victory was astounding. After opinion polls leading up to Election Day projected a race that was too close to call, the Conservatives ended up with 330 seats while Labour could only secure 232. This result is the latest in a series of polling “misses” (Scottish Referendum, US midterms, etc.) that have raised some questions about the effectiveness of traditional polling in the modern technological world. From a recent Bloomberg article:

“The second half of the 20th century was the golden age of survey data. But toward the end of the century, changing technology began to threaten the accuracy of polls. We now have caller ID, voicemail, and millennials who regard talking on the phone as a barbarism akin to the chamber pot. The modern American workday also compresses housekeeping and socializing into a few narrow hours, during which people are less likely to humor an unsolicited caller. In part because we’ve also seen the proliferation of robocalls in the survey industry and beyond. Pollsters say that by carefully calibrating for the missing responders, they can still get accurate results. But what if it’s getting too hard?”

Statistical modeling is one way that pollsters can make up for declining response rates. However, the U.K. election polls also presented some troubling evidence on this front. In the lead up to Election Day, the spread between all the relevant polls collapsed to all-time lows. This herding tendency suggested that pollsters may have been using the results of other polls as inputs in their own models, thus creating an artificially low standard deviation around a prediction that ultimately proved to be false. The FiveThirtyEight blog present the data graphically: We’ll be interested to track how polling evolves in the future, especially leading up to the 2016 Presidential Election. For the moment though, the experience in the U.K. is an important reminder that politicians and business leaders who rely on survey data to guide their decision making need to work harder to separate signal from noise.